If you find mobile phone software a little baffling – what with different apps, app stores and operating systems, and if you think a skin is something you find sitting on your body, take a deep breath. Prepare to add another piece of software jargon into your vocabulary: meet panels. 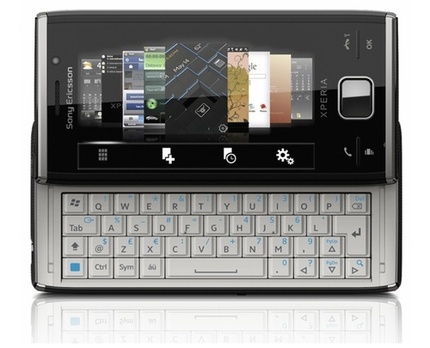 Unique to one of Sony Ericsson’s new phones the Xperia X2, I had a look at these little so-called panels on the new handset last week.

Sony Ericsson say the X2 is halfway between a Blackberry and an iPhone – serving both consumers and business customers. It’s an attractive, square-cornered handset with a slideable QWERTY keyboard, 8.1 megapixel camera that runs the latest version of Windows Mobile – 6.5. We’ll do a full review when we get a handset in the office.

The feature that most interested me though, is the part of the user interface called panels. It’s one of the key selling points of the new phone, making it much more customisable according to Sony Ericsson. Over the architecture of Windows Mobile they’ve built these “panels” and you flick between them and change them at any time. It’s kind of like having a choice of twenty-odd home screens. They’re also a bit like skins – user interfaces that the phone manufacturers build over operating systems like Windows.

On the phone I saw there were nine loaded panels but I think there are about 20 currently and the number will go up. Rather like apps you can download more.
Oh god, was my first thought as I contemplated yet another term for fiddly bit of software. But, after staring at this for a little while, it occurred to me that it might actually be useful to have different panels for different kinds of activities.

Panels are like collections of apps in a way. And it could be helpful to be able to group apps and phone functions in different ways.

For example you could have one panel for work – with all the apps you use in your working day – news sites, an RSS reader, your work email all sitting on a nice sober non-distracting background.

But come the evening you might want different apps, ones for going out, a Facebook app and a link to your personal email account, and maybe a picture of Robert Pattinson in the background or I don’t know whatever you’re into.

Preloaded panels include one which mimics a Sims interface where you have to click on a moving train to access your email etc. Pretty out there.
So : confusing – yes, but don’t rule them out yet.
Full report coming soon..