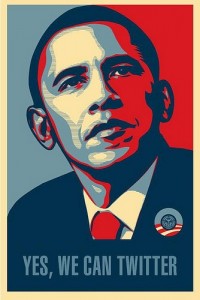 We’re very sorry to report that Barack Obama has never used Twitter. No, I didn’t expect that he personally composed *all* of the Barack Obama account Twitter updates, but some – surely!

In my heart of hearts I always suspected that some of those campaign tweets were from the Blackberry of the great man himself.

And when he followed me back all those months ago it was always possible that it had been Barack himself who had happened to log in that evening and check the new followers section.

But no, Barack has not been on Twitter. His Twitter account is all the work of minions. At a Q&A session with Chinese students in Shanghai, a student asked him : “Do you know about the great firewall and should we be able to use Twitter?” His reply: “I have never used Twitter but I’m an advocate of technology and not restricting internet access.” (via Breaking News Online)

He does have a large country to run, so I suppose he’s busy, but this must be a disappointment to at least some of his 2.6 million followers…

So if you’re reading this Mr President uh, um… Twitter is good, you should try it. Can I have an autograph?

ReadWriteWeb took the opportunity to make a wider point about change and global politics:
“Got that? The President went to China, was asked about Twitter and it was streamed live on his Facebook page. How the world has changed.”

Plenty more about Twitter from us tomorrow when we’re covering the 140 character conference #140conf.

Related: Why Pointless Babble is the Point of Twitter