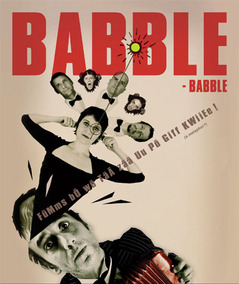 I’m only going to do this once. If there’s one thing more annoying than twitter-bashing (twashing?) it’s people responding to twitter bashing.

The correct response is simply to register a tweet of annoyance, and move on. BUT – this article from the BBC broke down my self-restraint and filled me with the need to issue a rebuttal. Asap. “Twitter tweets 40% babble” was the headline, and the statistic came from a marketing group called Pear Analytics who had done an analysis on 2000 random tweets.

They picked up the 2000 tweets (from America) over a 2-week period, taking twitter snapshots every half hour between 11am and 5pm on working days. They then split the tweets into six categories, one of which was pointless babble. And pointless babble won – with 40% of all tweets falling into this category.

Anyway, their conclusion was Twitter contains more pointless babble and less news than they expected, but good god, they have ridiculous definitions of both “babble” and “news”.

Pointless Babble or Hyper-Local news?
So how do they define pointless babble? I quote: “These are the ‘I am eating a sandwich now’ tweets.” Well, I have asked for clarification on where the boundary line between observation and pointless babble sits: or whether 40% of all Twitter users are truly eating sandwiches at all times. What about tweet such as:

From how they define their categories I believe that would be babble, but I think it counts as news, of a hyper-local sort.

But how do they define news? – “Any sort of main stream news that you might find on your national news stations such as CNN, Fox or others.”

It is true that lots of people are tweeting about sandwiches, as a quick search for sandwich uncovers: @ne0nne0n tells us “just had sandwich, tasted of onions, with no onions in it, thats odd, gonna head off into london in a bit”

But then maybe lots of people are eating sandwiches. “With the new face of Twitter, it will be interesting to see if they take a heavier role in news, or continue to be a source for people to share their current activities that have little to do with everyone else,” said Ryan Kelly, founder of Pear Analytics, told the BBC.

But clearly if many people are in fact eating sandwiches then it is not an activity so isolated from everyday life so as to have “little to do with everyone else”. I assume interest in food is not exactly the weird minority pursuit that he is suggesting. I mean millions of people watch cookery programmes don’t they.

I’m pleased to see that many people on Twitter have been replying to @pearanalytics to tell them exactly what sandwich they are having for lunch.

So, Pear Analytics, not all news comes from mainstream external news sources and while hyper local news is not of interest to everybody, neither is traditional oh-look-here’s-a-politics-story-from-the-Times-news.

Because sometimes what is going at that end of your road is of more immediate interest to you than what someone said in Westminster yesterday afternoon.

If you do want to use Twitter as your primary news source – you follow a news site and get what is basically an RSS feed on Twitter.

There’s also a research flaw in testing the main tweet stream of Twitter. Do people usually look at the tweet stream on Twitter? No – surely most users look at the people they follow, as displayed on their personalised home page. In which case they may see babble, but it will be from people they have chosen to follow – thus are probably interested in. Or perhaps they click on a trending term or type a search term in: but they are probably prepared for spam and babble because we all accept that you get the white noise with searches.

A few final gems garnered from the Pear Analytics white paper: most people babble pointlessly at 3pm in the afternoon, especially on Thursday, whereas most say something worth ReTweeting at 11.30am on Monday morning.

Right, sorry . I’m going to get a sandwich (full details on Twitter).