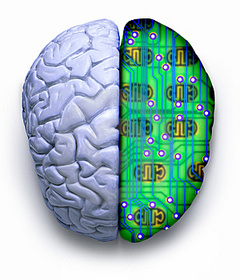 Ah, good, somebody is working on making brain chips so we can control computers by thinking about them. And that somebody is not a mad robo-obsessed scientist, but Intel, the commercial chip giant, making it seem more likely that chips will be arriving in a brain near you in the not-too-distant future.

According to ComputerWorld, Intel researchers in Pittsburgh told journalists that brain implants are harnessing human brain waves to operate computers, television sets and cell phones… letting you surf the internet, manipulate documents, and so on.

Of course the wholegetting a- computer-chip-embedded-in-your-skull thing will be voluntary (at least to start with mwhaha etc). But Intel reckons there will be lots of volunteers:

“I think human beings are remarkable adaptive,” said Andrew Chien, vice president of research and director of future technologies research at Intel Labs. “If you told people 20 years ago that they would be carrying computers all the time, they would have said, ‘I don’t want that. I don’t need that.’ Now you can’t get them to stop [carrying devices]. There are a lot of things that have to be done first but I think [implanting chips into human brains] is well within the scope of possibility.”

Apparently we’re all getting fed up with having to reach into our pockets and use our fingers to operate things. Well, that’s what Intel research scientist Dean Pomerleau reckons: “users will soon tire of depending on a computer interface, and having to fish a device out of their pocket or bag to access it.” Computerworld reports. “He also predicted that users will tire of having to manipulate an interface with their fingers.”

“We’re trying to prove you can do interesting things with brain waves,” said Pomerleau. “Eventually people may be willing to be more committed … to brain implants. Imagine being able to surf the Web with the power of your thoughts.”

By learning the patterns and electronic signals that certain words or pictures make in your brain, a chip could be programmed to recognise them and could then send that information to a computer.

So thinking the word “water” could be the equivalent of typing it.

Still a distance off, scientists plan to make external headsets first before working on developing a microprocessor that could fit in your head.

Related: EEWWW of the week: get your phone embedded in your arm