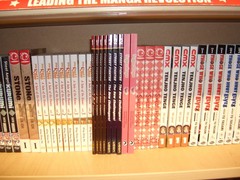 A story on the BBC suggests that book store Borders is teetering on the edge of the closure due to financial woes.

This is bad. This is practically a Severe Geek Alert – if Borders closes its 45 UK stores where will geeks go when they’re wandering around the cold streets of British cities? Hardly into, like, a fashion shop. No shelter for fragile geeks there, nowhere to sit down and stare moodily into the art section while sipping an Americano. Just lots of terrifying people and no armchairs.

WH Smith is alright if you want to buy a magazine… but way too noisy to hang around in, and no, there are no coffee shops in WH, just little kids who keep running into you.

The BBC says: “Reports have suggested Borders does not have enough cash to last until Christmas. It is thought it could go into administration if no buyer is found.

“The chain, which also owns Books Etc, has suffered from increased competition from online retailers, such as Amazon, as well as supermarkets.”

GULP. Can the government fund Borders in the interest of the nation’s geeks?