Celebrity chef Jamie Oliver has just released a cookery app on the Apple store. It’s called Jamie’s 20 minute meals, costs £4.99 from Zolmo, and should help you cook dinner (a little like Dishy, which we reviewed here).

Short of inspiration and can’t face fish fingers again? Shake your iPhone and the app generates a random recipe. You get the shopping list, which takes you through the supermarket, then back in the kitchen watch the videos and pictures of Jamie talking you through each step in the recipe. The app contains 90 minutes of genuine Jamie footage apparently.

Richard Branson released an app this week too, though, TBH this is really an eBook, with some of Branson’s words of wisdom and a few audio files, of choice selections spoken in the great man’s voice. Richard Branson: Business Stripped Bare clocks in at a steep £7.49. 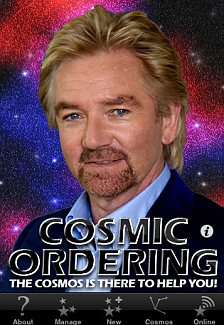 And Noel Edmonds helpfully launched into the apps market last month with a £1.20 app that lets you leave orders with the cosmos. Yes you read that right, he’s a new age philosopher is Noel, and errr.. thinks this app, Cosmic Ordering, which lets you record orders you place with the cosmos, can help you harness its mystic powers. A bargain for £1.20.