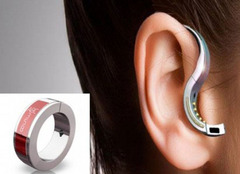 It’s not an end to looking like an escaped lunatic whilst you wireless natter on a Bluetooth headset. It will, however, make you look like the chic-est and most futuristic madwoman on the block (.. a look I strive for daily).

Is it a ring? Is it a Bluetooth headset? It’s both! They’ve called it ‘The ORB’, it’s designed and developed by Hybratech and Absolutely New who hope to launch it in the USA, Asia and Europe in January 2010.

An innovative Bluetooth headset that transforms from a ring into a headset with a quick twist.

It’ll come in two editions, ‘The standard model’ and ‘The deluxe edition’. The deluxe model will feature a ‘FOLED’ (Flexible Organic Light Emitting Diode) displaying caller ID and calendar reminders. It also offers voice-to-text for communicating without taking the ring off the finger. Both models have a range of 30ft, are waterproof and come in small, medium, large and extra large.

Instead of sticking it in your ear it simply hangs over and uses bone conducting technology to deliver and receive sound. The two editions – base and deluxe have a suggested RRP of US$129 and US$175 respectively.

Glowing finger jewellery has a bit of a reputation and although this one won’t make you invisible, you probably will be stroking it calling it ‘my precious’.

Absolutely New and Hybratech [via Gizmag]

One thought on “The ORB – half ring, half bluetooth headset – all crazy gadget”