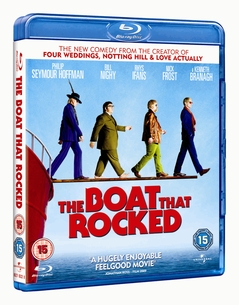 It’s a day of giveaways today here at Shiny towers.

To celebrate the Blu-ray and DVD release of the Richard Curtis comedy ‘The Boat That Rocked’ which is out today, we’re giving away 5 copies of the film on Blu-Ray.

We’ve also put together a little bit of information on how people probably used to watch films, on boats that did actually rock…welcome to Shiny Shiny’s ‘Evolution of The Film Player’.

Before we had the Blu-ray technology that allows us to watch our favourite films in an even more detailed environment, fellow film goers had to make do with heavy handed projectors, lumpy VHS systems and then the more slimline DVD systems.

A trip to the cinema used to be flanked by the accompaniment of an old fashioned film projector with reels, which creakily projected flickery black and white images onto the screen.

Some independent chains still offer this kind of ‘old fashioned’ cinema experience, complete with the cheery chap selling his tray of ice creams during the interval.

We then moved on to the infamous ‘VHS’ systems, remember those? The ‘Video Home System’ was introduced during the late 1970’s, and meant that you know had the power to rewind, fast forward and play to your heart’s content.

Slightly heavy and clumsy looking, VHS machines were never the most fashion forward of technologies, but can now be seen frequenting all the cool vintage shops as they seem to be becoming a key ‘retro’ item to have in your front room.

In 1995, DVD ‘Digital Video Discs’ started to make an appearance which offered data storage alongside the traditional video storage. An intelligent and revolutionary invention, DVD’s now offered the consumer a whole range of options; both video and audio content, the ability to delete.

In 1998, HDTV sets began to appear in the film consumer market, offering a higher quality of viewing but there was no widely accepted or inexpensive way to record or play this HD content – cue the arrival of the ‘Blu-ray’ player!
The ‘Blu-ray’ player was initiated to improve the performance and ‘supersize’ the usage of the traditional DVD player.

The first actual Blu-ray device was introduced into stores in 2003, and after a lot of technical hitches and legalities, the first Blu-ray titles were introduced in June, 2006. Now, as of June 2009, we as consumers can purchase more than 1,500 Blu-ray titles in the UK.

But what is the next development in the film world now we have reached these heady heights I hear you ask?

Just as there were multiple formats fighting for the current “next generation” format, there are a few different formats that look poised to become the next favoured media format when Blu-Ray kicks the bucket. One of which is real Holography.

This new technology could hold up to 3.9 TB per disk, which is a hell of a lot of films and is a lot more than the 50 GB you can find on Blu-ray disks. Watch this space for more information.

Now that you have read and obviously completely taken in this information, answer this question to win one of 5 copies of The Boat That Rocked on Blu-ray.

What date is The Boat That Rocked DVD and Blu-ray available to buy from?
1) September 7th
2) September 11th
3) September 15th

Email me at [email protected] with your answers and we’ll be pulling 5 lucky winners out of a hat on Wednesday.