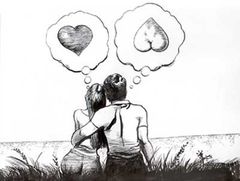 We’re no longer pushed to marry the first guy that comes along or save ourselves for the wedding night meaning we’ve become a generation of promiscuous men and women.

However, you may be able to count the number of your partners but what about indirect ones? Confused? So were we.

According to new research released by Lloyds pharmacy, the typical British adult has slept indirectly with 2,811,024 people. This is the number of people your partner has had times the number you have had etc.

Now although many of us are careful it also says the cases of sexually transmitted infections rose last year by 0.5%, to 399,738 and cases of Chlamydia increased by eight per cent between 2006 and 2008.

It’s therefore launched an online calculator, which allows people to work out the number of indirect sexual partners they have had and help them understand the risks of unprotected sex

The average British man claims to have had nine sexual partners while the average women claims 6.3 partners, giving an overall average of 7.65. However, as the new calculator demonstrates, they are potentially exposed to the sexually transmitted diseases of hundreds of thousands of others.

The calculator, which uses data collected from more than 6,000 UK adults, is called Sex Degrees of Separation, a reference to the famous theory first proposed by Hungarian writer Frigyes Karinthy which states that no one person is more than six steps removed from another.

When people enter the age range of each partner, the calculator raids its database to work out how many previous sexual partners people within that age range have had on average. It then repeats this process for five further ‘generations’ of partner. This is added together to give a Sex Degrees of Separation total.

Now I’ve just had a play around with this and it makes for some scary reading, but any website that gives us piece of mind and advice is always something to publicise.