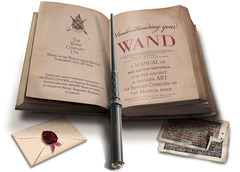 “The wand is not a toy, it is an instrument of control.” In this case, it’s a remote control.

You won’t be able to ‘alo-hamora’ locked doors with the Kymera Wand from Wand Company but it will (probably) ‘stupefy’ visitors and you might be able to pull off the little known ‘diminuendo’ charm on your TV.

Here’s the upsetting part. It’s not actually enchanted. It contains an infrared LED like boring everyday remote controls but eliminates those pesky complacent buttons in favour of an onboard processor and accelerometer. Knowing this will not stop us pretending we’re Hermione – give or take a decade and without the enormous bank balance.

In addition to adjusting the volume you can also change the channel with a flick of the wrist. The wand has 13 gestures in total and you can programme these gestures to be anything most infrared remote controls do.

There’s also a practice mode in case you’re worried about transmogrifying your iPod into a frog.

It’s released on Oct 1st, priced at £49.95 and comes in a pretty olde-worlde presentation box.

The Wand Company [via the lovely Tech Digest]