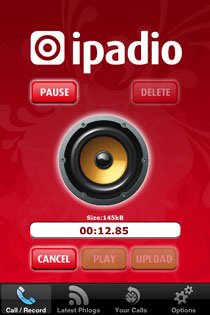 If Twitter lets you send a text message to the world, it was only a matter of time before someone invented an application that let you make a phone call to world. (I say the world – I mean your Social Network and the miscellaneous people who look at your blog.)

Ipadio is a phone blogging tool that lets you do just that. They released an iPhone app last month and an Android one today. Strapline: “You talk, they listen”.

To phone blog: you open the app, or (if you’re not blessed with an Android or iPhone – call a local number) and speak, sing or just prattle merrily into your phone for up to 60 minutes, then Ipadio uploads your recording to your phlog (phone-blog, geddit?). Your phlog is available on ipadio.com, you can also embed it on your Facebook profile or on a separate website.
Follow on after the jump

The audio is high quality and the site is affiliated to voice recognition tool SpinVox which converts spoken words into text providing automatic titles, tags and transcriptions for all the audio posts you make.

As someone who mainly deals with words that are written down… I was sceptical that I could say anything coherent in my phlog. Or that I’d want to talk to my phone when there wasn’t anyone in particular listening.

But after blabbing into my phone for a little while, I realised that talking really is easier than writing stuff down and that you don’t have to be Terry Wogan to think of things to say.

People were always sceptical with Twitter that people could ever say anything worthwhile about their daily lives, but Twitter has been proved to work… and I think phlogging could work too. Though of course with Ipadio posts being up to 60minutes it’s not exactly going to be so easy to browse through.

As a social tool, I actually think Ipadio could be improved if the maximum time was reduced to 2 minutes: then Twitter-like, everything would end up being real short and snappy.

However, it doesn’t look like ipadio are only focussing on the social media market. From their site, it sounds like they want to unleash the power of citizen journalism and perhaps make the world A Better Place at the same time (well, help information spread more easily at least). And of course having the ability to report for 60 minutes would help if that’s what you’re after. Check out these two possible uses from the Ipadio website:

1. Ipadio and Citizen journalism: “Ipadio is an obvious reporting tool to use from trouble spots around the world. Professional journalists are trained in how to report discretely and even anonymously using telephone and digital media, and tend to operate under the protection of their employers. The same is not necessarily the case for citizen journalists.”
So someone in Iran can pick their phone, and yell a report on what’s going on around them they don’t need to sit down and type their observations out on their smartphone’s keypad.

2. Ipadio and access to information for disabled people: “If you’re disabled maybe you can’t travel easily or you’re blind and text isn’t a helpful medium – then instant and cheap voice broadcasting is a major leap forward.”
Their example: “Let’s say a really good coffee making machine has been launched but the instructions are not available as Braille or as a recording – it only takes few minutes to read those instructions out and thousands of users suddenly have what they need for the ideal espresso!”

It won’t take over from traditional blogging, but given that there’s not a huge choice of easily searchable audio content online and that Ipadio is so easy to use I think it could take off. Like blogging, it strays more into journalism territory than social networking, that could get interesting.

On a side note: My dearest hope is that I’ll come across a dead horse at some point then get to record an Ipadio report on it. Then I’ll be “phlogging a dead horse”.. HHahaha. Okay. Enough of that.

Related: Skype teams up with Spinvox