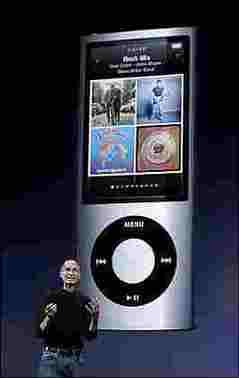 Last night Apple once again did what they do best and launched a new range of iPod players.

First on the list was the new iPod Nano with a built in video camera that lets users capture footage when they’re on the move, and upload the clip to video-sharing sites such as YouTube. It also has an FM radio and voice recorder .The video Nano 8GB can store up to 2,000 songs and will cost £115, while the 16GB version is priced at £135.

“Video is exploding in popularity, we want a piece of that,” Steve Jobs said.
Next on the Apple play list was a larger capacity version of the iPod touch, which at 64GB can store up to 14,000 songs. This will cost £299.

The company also updated its iTunes software, and showed off a a new service, iTunes LP, which allows users to download cover art, sleeve notes, and other content, such as artist videos and interviews, when they download an album from the iTunes store.
“Some of us are old enough to have bought LPs,” said Mr Jobs, who promised that the new service would recreate some of the joys of listening to old records.
However, if you don’t fancy any of these new gadgets then you’re in luck. The company also lowered the prices of existing iPods.

We think Apple has done amazingly well over the years, bringing out newer products, and in my view, revolutionizing the way we listen to music.

With this new announcement, we decide to look back at the history of this music device, which has gone from brick to slick over the years.

Read on over the jump for more information.

Apple introduced the first-generation iPod classic on October 23, 2001. The first iPod had a 5 GB hard drive capable of storing 1,000 songs encoded using MP3. It also had a 1.8″ hard drive, compared to other manufacturers that used a 2.5″ hard drives at the time. The iPod had a rated battery life of 12 hours.

The second generation iPod classic was introduced on July 17, 2002 and had the same body style as the first generation. The hold switch was redesigned, a cover was added to the FireWire port, and the mechanical wheel was replaced with a touch-sensitive wheel.

On April 18, 2003, Apple revamped its iPod classic, giving it the very original name of the third-generation iPod classic. Thinner than the previous models, the third generation models replaced the FireWire port with a new Dock Connector.

Released on February 20, 2004, The iPod mini kept the same scroll wheel as the 3rd generation ipod but because of its size the four touch buttons that were beneath the screen were moved beneath the wheel itself. It was the height and width of a business card and was built around a 1 inch 4 GB hard drive.

A second Generation ipod mini was introduced in February 2005 with a new chipset, 6 GB version, and much longer battery life of 18 hours. This year also saw the launch of the ipod photo.

The ipod shuffle was created in 2005 to keep the price of the iPod down. To do this Apple scrapped the scroll wheel and the LCD display and upgraded the device’s shuffle mode. This was the year the first iPod Nano was launched and was intended to replace the iPod mini which was discontinued the same day the nano was released.

The old Nano was replaced in September 2006. The new one was still tiny but tougher and dressed in aluminium. It had a brighter screen and an improved battery life and came in three capacities and six different colors; 4 GB blue, green,pink, and silver; 2 GB silver, and 8 GB black. This year the first iPod Touch was also launched.

The iphone. In my opinion one of Apple’s best product, this device was launched in January 2007. It didn’t have a scroll wheel but used the same touch screen technology as the iPod Touch and let people make calls.

In 2008, we saw the iPod Touch Second generation and iPod Nano 4th and 2009 bought us the iPhone 3GS and our most recent announcements.

We expect to see a lot more from Apple in the future.