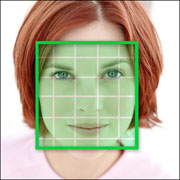 Getting a laptop with face-recognition is like having your best friend on your desk – not only is it helpful and informative, it also perks up when your bleary little face comes into its viewfinder.

Well by perk up I mean lets you access your user account, but it’s roughly the same thing.

Of course face recognition tech has been around before but it is only in the past few years it has come out of the arena of scary border security interrogations and into the lives of simple consumers like you and me. Yes we may be simple, but we have complex faces that can be recognised with a webcam and a visual analysis program.

Brilliantly, back to my laptop, there’s also a little user log which records the day, time and the mugshot of you that it accepted. So you can map how you look at 7.30am Tuesday morning compared with Saturday afternoon… and the time your friend tried to log in to check his emails but couldn’t, ha, because his face is different.

See how and why after the jump

Where do we find facial recognition technology these days?

The police and border control: are you the rightful owner of that passport? The computer knows… Also used to scan databases of criminal mugshots to match faces of suspects or recent offenders with previous offenders.

Silly web apps: Some of the more frivolous use for facial recognition come from myheritage.com. Work out which celebrity you most resemble!
Work out whether a child resembles its father or mother more on the look-alike-meter. Also available on facebook.

iPhone photo tagging: yes of course there’s an app which does this, Face Match helps you upload photos to Facebook quicker by auto-tagging them.
http://www.148apps.com/reviews/face-matchface-recognition-pbf/

Logging in barrier: available on laptops already, potentially available on ATMs where it would replace or supplement pin numbers.

So how does it work?
Three ways: The main one is by “extracting landmarks or features from an image of your face” not that they’ll be pulling the Eiffel tower out of your cheek, but that they make a map of the bits that stick out and get information about the size and shape of your jaw, cheekbones, nose and how far apart your eyes are. They then get a list of measurements that they can match that map with the image they have of you on your database. 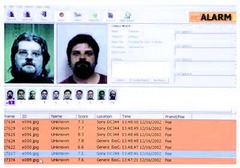 The second type is 3D face recognition a new field and more accurate than the simpler sort – which uses 3D sensors to get, yes a 3D map of facial contours.

Skin texture analysis is the third sort which uses visual details of skin as a unique thumbprint. It “turns the unique lines, patterns, and spots apparent in a person’s skin into a mathematical space” according to Wikipedia.

It can be added to the other sorts of facial recognition to improve the accuracy. I can’t even bring myself to make a spots would turn into a mathematical space.

Why do we use it?
British face recognition company Aurora sums it up best: “everybody has a face”. It’s also super easy to do: just involves taking a picture – much easier than scan someone’s iris or getting a DNA sample. And well, according to Aurora their programme is better at recognising faces than humans are.

Can it be PWNED?
Apparently yes.

More expensive technologies make for more accurate recognition, but there are definitely ways to get round the lap-top barrier bits.

A couple of Japanese hackers managed to break the facial recognition on laptops by using photographs instead of real faces, and changing lighting and photo angles in a digitised face until the system caves in and permits access.

However, since I don’t fear a major break-in on my laptop, I just won’t let any Japanese hackers near it till the facial recognition tech improves.