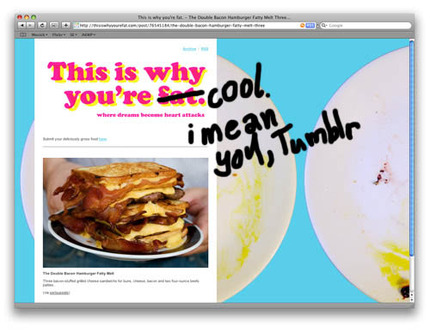 What makes a blogging platform cool and another less cool? Posterous has stolen my heart – for its simplicity and ease of use – but not everyone is so impressed by ravishingly efficient content management. Some people have other criteria when assessing blogging sites or social networks – like, are they cool?

Tumblr is really cool apparently. Several people on Twitter and IRL have told me so, and somehow I know it is when I look at it. This one for example. But why?

Fashionistas are always making comments like ‘bat-winged jackets are really cool’ and then inventing spurious reasons about sleeve-trends and how bat-wings/retro-tailoring/apricot leather captures the zeitgeist as proof for their statements.

I just decided, for one post at least, we’d do the same with blogging platforms. Of course this opens up definition-busting broader questions like ‘what is cool anyway?’ I don’t know, but let’s shove that aside and make a few lists about stuff I do know.

What sites are cool?

Well my friend disagrees with me. And lots of people on Twitter also disagree with me. So let’s just say that’s not a definitive list. (My other friend said “cool people don’t talk about being cool” – that’s me out then).

What makes a site cool?

1. Being good enough
Tumblr is good at what it does. MySpace was great at what it did circa 2002. It’s still a good way to listen to music by unsigned bands. Cool sites don’t have to be the best at what they do, but they have to be good enough. Even if the ghost of Andy Warhol, Gareth Pugh, Kate Moss and all grindhouse bands in the world got together to make a website it would only be cool if it actually worked.

2. Being strong on design with good branding
What does the site look like? What does the logo look like? What is the name? Why is Posterous called Posterous? No-one can pronounce it properly and the logo isn’t very striking. This is the sort of feeling that only marketing executives can articulate, but a it’s quite easy to feel the character of a site from things like logo and design.

3. Being customisable
Give creatives a bit of space for creativity. It’s tricky to get the balance right. Some people loved how you could customise skins on MySpace, some people hated it because it made browsing a messy, noisy, long-download, random experience. I think Tumblr gets the balance well. Photo-centric, you can change wallpaper and it. Customisation is one of WordPress’s trump cards.

4. Being associated with ‘cool’ content forms: music, photography, video
This is why Flickr and MySpace are on my cool list: and say… a site for DIY wouldn’t be. This is why Twitter seems more professional to me than cool. It’s my current favourite, but it’s like a news service. And news is just news.

5. Having a cool audience
Why do they go there? Because it’s cool. Why is it cool? Because cool people go there. This is a chicken and egg conundrum, but it has to start somehow. I fall for it every time. Oh that person I admire is on Tumblr? I want to get on Tumblr. Like a pathetic sheep more than a chicken.

6. Having a niche audience
Google isn’t ‘cool’ though I bet everyone from Anna Wintour down uses it. It’s in such general use that it is taken for granted. This is why Facebook just slips out of the cool list, it’s like internet wallpaper, I don’t even notice that I’m using it, it’s too big, too bland and too general to make any kind of statement. Flickr has photographers, DeviantART has art students.

7. Being new(ish)
If you’re the first to get a good idea that’s great. Fashion and trend are fickle and love The Next Big Thing.

Conclusion:
Cool for a blogging or networking site is a mix of having something which works well, a strong character which attracts a certain sort of person, and certain well-designed spaces where people can contribute. And if you want a short-cut, just associate yourself with something that already is cool.
Another conclusion: lots of the stuff I like isn’t cool by my own definition.

Silly question in some ways, but cool is a big deal in the tech world. It sells. Ask Apple.