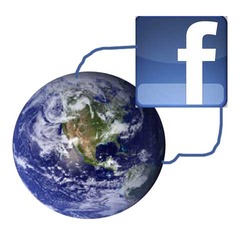 Facebook now has 250million active users – making it bigger than the world’s fourth most populous country. Which is Indonesia by the way.

And as one recent article claims, users don’t just ‘use’ it, they live on it.

Look here’s a heat map from Facebook showing it spreading like virtually simulated wildfire over the globe:

Mark Zuckerberg took the 250million milestone as an opportunity to promise new developments in his globe-dominating social-network baby. So how can Facebook be better and adapt to the changing netscape? We come up with 5 helpful suggestions:

1. Facebook dredges progressively more information into the public sphere
The life-blood of the site is now in the newsfeed. If friends don’t turn up in my newsfeed, I don’t click on them. Privacy issues always raise tensions but I think Facebook is going to have to coax users to let more of their information be aggregated and made public. It works quite well on Twitter.

Rumours on ReadWriteWeb about Facebook posts and pictures going public by default, turned out to be an exaggeration, but there is a sense that this is the direction the site is going in.

2. Facebook gets smarter about who you are…
If Facebook did start aggregating everything everyone did, there would be an explosion in the amount of information available. So, it would have to work out how to sort that information in a way that was useful. You can set certain preferences, but if Facebook started to use information that it knows but you don’t specifically tell it, it could do that even better.

For instance where you sit in the giant social map of Facebook’s 250 million users is something you can’t fully see, but if that information could be processed think how useful it could be. Sensitive, but Facebook could use that a) to work out what newsfeed information you’re likely to be interested in b) create a much more sophisticated advertising revenues for itself.

3. Apps are pruned and improved
Let me offer up two apps for improvement right now: events and videos. Both very useful, both could work a whole lot better. Videos just need to be quicker and simpler. Events is one of the few things of its kind on the net and almost the only way to organise a party, but I wish the app could have filters to clean out the spam events, or put them lower priority. If significant details could be fed into a calendar as well, like the googlemail calendar or the iPhone calendar application, that would be fantastic.

Then get rid of those damn spammy apps.

4. Facebook starts plugging in to other sites, becomes your online networking control panel
Sites like Friendfeed that collate your Twitter with your blog, Facebook, MySpace and Digg are still niche affairs. However, I think their time will come.

Facebook could pre-empt the aggregators by doing its own aggregation. It could be your online-networking control panel – allowing you to flick from updating something on LinkedIn to posting a tweet to checking messages on a dating site all from the same place – without having to log in and out of multiple sites.

I’m not saying that users of different sites will see everything about you- of course you don’t want someone browsing your CV on LinkedIn to flick onto the angsty livejournal that you wrote six years ago – but if you could control all those different social personae them all from one centralised panel, it would be useful.

Friendfeed allows you to split your friends up into groups. I envisage this working like that. Your friends/followers in different places are like different groups.

5. Facebook incorporates virtual reality
I would love it if this started to happen. If Facebook got real-time and started to geo-tag, just imagine how fun this could be. For this to work it would require most Facebook users to have GPS-enabled mobiles.

Say you have the pleasure of seeing someone standing on the plinth in Trafalgar Square and you leave a geo-tagged status update/tweet. A friend passing by an hour later picks up the comment that you have posted to Trafalgar Square. They can also pick up all other comments/pictures/tweets tagged by their friends to that area. It would start to create some kind of extra virtual layer over geographic places. You could extend the idea to other people too: say you passed your phone over a new acquaintance and a whole bunch of comments, posts, tags and photos swirled up.

There are more than a few questions about privacy and information overload with this idea, but potential as well.