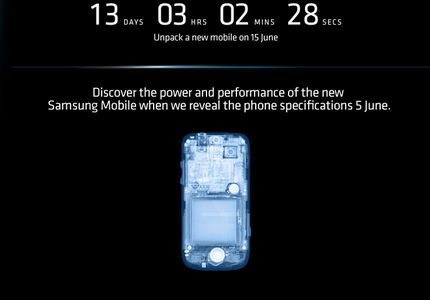 It’s been a big month for cameraphones, as we can now look forward to THREE 12 megapixel snappers hitting the stores soon. There’s the Satio from Sony Ericsson (formerly known as the Idou), an LG phone in the works, and now we have confirmation of the rumoured phone from Samsung. Their handset will be called the Pixon12 M8910 following on from their acclaimed Pixon, and will no doubt feature all sorts of autofocus/smile shutter-esque goodness, as well as an AMOLED screen.

But that’s not all my friends- we also have the rather intriguing image above to contend with, and the launch of a totally secret phone, the Samsung Blade- due out in a mere 15 days! All we can tell you about it is that it has a TFT touch screen, a 5 megapixel camera and AMOLED display.. All will be revealed soon though!