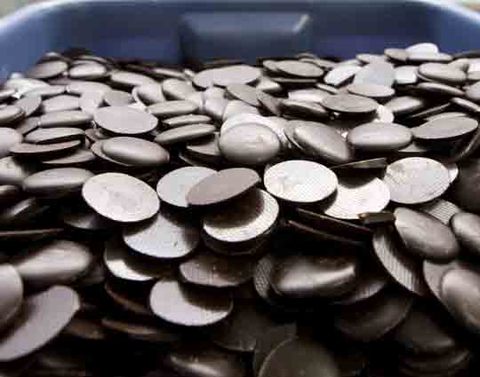 One of them used to design space shuttles, one of them founded tech ideas mag Wired, and together these two leaders of the tech world have joined forces to make: chocolate.

Timothy Childs worked on space and video technology but when Louis Rossetto met him at a convention a few years ago, they talked about chocolate. The conversation turned into a business plan and now Tcho (a cunning little combination of ‘tech’ and ‘choc’) is an up and running company.

As you might expect from their credentials – it is (apparently) damn good chocolate, and has a strong tech input from start to finish.

More chocolate after the jump

All machinery in their factory is computerised… to the extent that it can be entirely run by remote control from somewhere half-way round the globe (very convenient), and they go visit their cocoa bean suppliers in countries like Ghana and look at ways of introducing technology in the farming stage of cocoa bean production.

Most interestingly the factory has cameras throughout every machine in the factory and sensors in the chocolate, checking up on its flavour balances at a molecular level. This is great. I wish that technology were affordable. My dinners would be so much better if I could check up on them at molecular level.

Apparently (and the rumours seems to be bouncing around the net) Childs and Rossetto shipped the entire contents of a chocolate factory from the old German castle where it had been residing to San Francisco where Tcho is located, are mixing old traditions with new technology in an unusual way. And they’re using Silicon Valley business know-how to whip up funding.

I guess my initial disappointment was that the chocolate isn’t moulded into printed circuit board shapes or made to look like robots. In my opinion that would really cement the tech-chocolate connection.