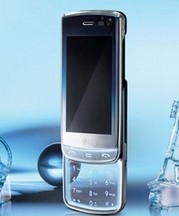 Manufacturers have been wracking their brains for a while now for ways to make phones stand out in the handset heavy marketplace. Some opt for cramming in as much memory as they can, adding user friendly touchscreens, or utilizing the Android OS, but LG have gone for something rather different.

They’ve decided to sell their latest handset on the fact that it comes with a transparent touchpad, that uses conductive sensor to allow you to doodle all over it.

But don’t worry, there’s more to this device than this gimmick, as it also features the S class interface that we saw on the Arena phone. You can use touch to control the spinning cube and open various functions via lightly stroking the command buttons as well as setting up Gesture shortcuts.

The phone also packs in an 8 megapixel camera, Wi-Fi and bluetooth and comes with 1.5GB of internal memory (expandable to 32GB). Check it out in the video below.

It’s available on contract from the 1st July at the Carphone Warehouse.

One thought on “Shiny Preview: The LG GD900 Crystal”