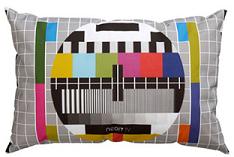 Remember that test card, you know, the one with the slightly bemused girl, noughts and crosses encrusted chalk board and the very sinister clown, which incidentally had no arms (what’s that about?). Can I just say – did anyone else find it creepy to see a little girl on their TV screen, playing games with her (creepy) clown doll to the sound of a relentlessly high pitched bleep? Just me then?

Has your descent into old age mean you now go to bed waaaay before the test card rears its head in the midst of the night? Do you miss seeing that assortment of colourfully visual diarrhoea? Get the test pillow and you can tune in (geddit?) whenever you want. Albeit it’s the test card sans little girl and disturbingly creepy clown, but you get the gist… and the memories for £27 here. It gives the saying ‘curl up in front of the TV’ an entirely new meaning.

Now for a bit of test card history. Did you know it was first broadcast on 2nd July 1967, the day after the first colour pictures were shown to the general public, right up until 1998,? I bet you also didn’t know the test card is back and the girl used in the original test (who certainly isn’t a little girl anymore) goes by the name Carole Hersee. And does anyone even know what the purpose of the test card is, other than being a landing screen for after hour TV? Well let me tell you. Let’s say you’re wishing to set up your new TV, the test card acts as an indicator to help you adjust colour settings. And in the words of the BBC, “Carole’s face should look natural and the primary colours should not be very bright”. And there you have it.