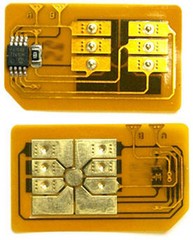 How many times have you been frustrated when you’ve accidentally locked your phone by inputting the incorrect PIN number? PUK numbers are all well and good, but by the time you’ve been on hold for half an hour on a premium rate number you sometimes feel like you should just have bought a new phone. And don’t even get me started on phones with proprietary networks (Yes, iPhone I’m talking about you…).

I’m not saying this slim piece of plastic will work on every phone, but it does mean you won’t make your warranty invalid by modding the device.

It’s a Plug ‘n Play simcard that fools the phone into running any SIM card. OK, you do have to CUT your SIM card which is a little worrying, but they have said that if the device doesn’t work once you’ve adapted it to contact them, so hopefully they’ll sort it out for you.

And they say it’s iPhone compatible, which could be a blessing for those who desperately want one but are tied into 18 month contracts.