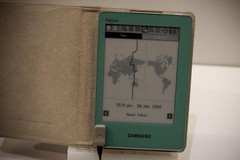 So, the Amazon Kindle may or may not make it over here. Quite frankly I’m getting bored of the whole will it/won’t it scenario. But it turns out I’m not the only one who’s fed up of playing the waiting game – so is Samsung. Joining the eBook party and bringing with it some touchscreen goodness is Samsung with its Papyrus eBook. Similarly to Fujitsu’s FLEPia, the Papyrus is initially Korea-bound (in June), but there are plans to bring it to the UK and US (typically) at a later date.

The A5 eBook will come sans SD card slot, but will feature a stylus and 512MB of onboard storage, a leatherette case, as well as being available in a variety of colours. Reading capabilities aside, the Papyrus will also house notetaking capabilities, a world clock, calculator, and contacts, giving you a modern day Filofax with added abilities.

Samsung is yet to confirm its price tag, but $299 is the figure being used so far, making it $60 USD cheaper than Amazon’s offering. However, it will fall short of EV-DO connectivity.