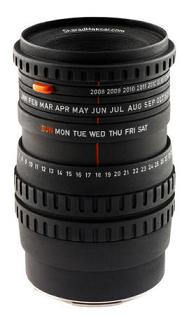 Mundane objects disguised as gadgets always go down well in Shiny Towers. And today it’s a camera lens… no wait, that’s a calendar dressed up as a camera lens. If you turn your attention to the focus, shutter speed and aperture rings, you’ll notice the day/month/year combo that’s usually more apt on a calendar, diary or something else with equal planning prowess.

Designed by a photographer (of course) the calendar is fashioned from a single block of aluminium (much like the Macbook Pro’s peculiarly named unibody) and goes all the way into the future, as far as 2032 (hopefully that isn’t an indication to the end of the world). I imagine this will be drooled over by camera buffs and generally fans of wonderfully weird gadgety things.

But before that dribble starts to trickle, you should know this is probably one of the most expensive calendars ever, at $2,000 USD. It’s not clear whether it’ll be powered or whether it’ll have to be manually manipulated, but at that price, I’d like to think there isn’t anything labour-intensive about it.

Check out the designer’s site here

Like this? Read this: Geek Chic of the Week: The camera lense coffee cup

One thought on “Is it a camera lens? Or could it be something else…”