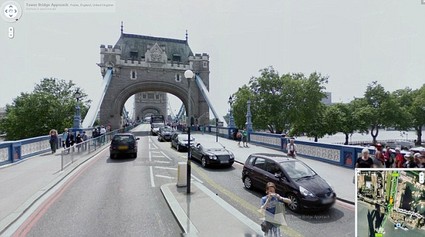 It’s finally London’s turn to get the big brother treatment – Google Street View has just gone live in the UK. Google has spent the best part of last year sending out its conspicuous camera equipped Google cars to snap up street level shots of the lanes of London, and now it’s ready to give users a 360 degree close up of buildings, cars and people. At the moment, the service offers views from 17 different cities in the UK, with more to follow over the next few years. The long term plan is to allow Google Street View to eventually permit anyone, anywhere in the world to search for a UK address or postcode. This means you’ll be able to give your international friends and family a virtual tour of your town or show off the house extension you got a few years back.

There are many who believe Google Street View is a burglar’s paradise, and they’re not wrong. Privacy activists have been all over Google like pigeons on bread, claiming the service is an invasion to privacy by showing people and their houses, and they’re not wrong. But Google has promised it has blanked out faces and blurred number plates, which as I can tell so far has been adhered to. But that still leaves the issue of the blurring of houses, which quite frankly would render part of the service worthless, so it’s a bit of a catch 22 predicament and something we’re all just going to have to get over.

We’ve all been time wasting this morning and Street Viewing where we live, and it’s a bag of mixed emotions here in Shiny Towers. Feelings are split between “oh my god that’s soooo cool” to “that’s a little unsettling that anyone can see my house”. I’m on the fence – I think it’s a bit of both, although I am a little uncomfortable with people being able to virtually get so close to where I live they can see the colour of the door number!

Based on how well we know our respective areas, we’ve determined the images are at least a year old. Users will be able to browse maps of towns as they would do normally, but now there’s the option to view it Street View style. Go on, take a look for yourself, check out your old flat or your favourite haunts – it’s A.MAZING.

[via The Daily Mail]