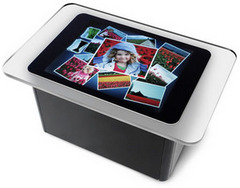 This isn’t just any table, this is Microsoft’s futuristic, touchscreen Surface – the future of multi-touch multimedia interaction. Microsoft Surface is without a doubt one of the coolest coffee tables I’ve ever seen. But of course, this isn’t your average coffee table, this is a multimedia hub that’ll allow you to browse all kinds of multimedia through an incredibly responsive Natural User Interface, not to mention a very cool piece of technology. The option to utilise it as a coffee table would be entirely up to you.

Its insides consist of 2GB of RAM and a standard CPU, with Vista running the show, but that’s ok because it’s not trying to compete with the latest computer equipment. The top of the Surface is a 1-inch thick plate of glass with a frosted bezel and an active central area, giving it a nice modish finish.

Dan went to see it in all its touchscreen glory and he was blown away. Take it in for yourself after the jump…

Steve Ballmer got a little carried away in all the hype and excitement, prophesising that every home will have one by such and such a date, which is too far fetched an aspiration when its £8,500 price tag is brought into the equation. But what you can expect is to see the Surface in shops such as Carphone Warehouse to browse the latest phones and their specs and Tesco for a comprehensively detailed wine list for its wine club. The Surface really shows and proves when it interacts with objects with RFID codes. Using Tesco’s seemingly monotonous service as an example, users will be able to scan a bottle of wine and pull up all kinds of information on each vintage and rate them, amongst a wealth of other interactive things. The Surface is also WiFi and Bluetooth enabled.

If you happen to have a spare £8,500 to put one in your abode, you needn’t barricade it to deter the kids – it’s practically spill/party proof. And the water based screensaver that ripples at will when interacting with your hand/arm/finger/ would be enough to keep the kids (and a fair amount of adults) quiet for more than a few hours. But if you nearly spat your coffee all over your screen when you read the price, you’ll find these bad boys in places such as casinos in Vegas for gambling and concierge purposes, which is testament that it’ll be able to take the odd spillage and possibly a few knocks and scrapes. Don’t forget it’ll be making an appearance in Tesco and Carphone Warehouse soon too.