Today is Ada Lovelace day, the day when women in technology are celebrated worldwide. There are so many fabulous women I could nominate for this award, but to avoid accusations of favouritism and poisoned emails, I’m going to nominate fabulous women from the world of TV. It’s a difficult choice to make, as there are so many impressive women represented in this medium (Alex Mack/ Penny from Inspector Gadget), but I’ve made the difficult decision to nominate Willow (a.k.a Alyson Hannigan) from the show Buffy the Vampire Slayer. 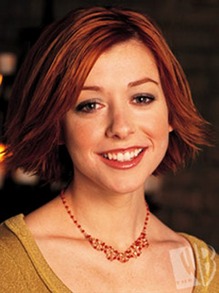 And why does this red headed lady grab the top position out of the many, many worthy candidates.? Well, to start off, she’s a witch. A bona fide magic working, spell weaving mistress of the night, yet she’d rather Google her way out of a problem then cast a spell to make it go away (apart from the episodes where her hair turned black, but we’ve forgiven her that).

Always seen with her head in a book, and a firm friend of the library, Willow made geeks cool for everyone. True, she may not have kicked ass like Buffy, but I’ll never forget her use of the web to come up with solutions, and her level headedness meant she’d always use brains rather than brawn. She was an inventor, an artist, and an attractive alternative to Buffy’s super powers, proving that the ordinary intelligent girl could kick ass without having to be born ‘the child of destiny’.

Willow, we salute you- and I’m sure many women have followed in your footsteps, you’re an inspiration to us all, and Joss Whedon- she totally deserves a spin off show!