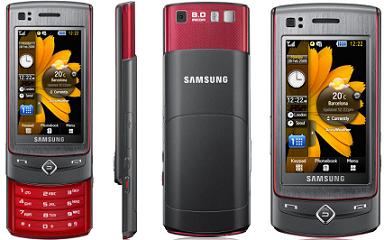 This is going to be one heck of an exciting week, thanks to the slew of handsets about to be unleashed on us this week at Mobile World Congress. Not only does this mean being treated to an innumerable amount of handset greats, but it also means the battle of the phones is about to take a vicious turn, as all handset manufacturers attempt to kick, punch and claw their way to the top. Luckily for us, some mobile makers have been a tad on the impatient side by giving us a heads up on what to expect (namely LG and Samsung). And on Friday, just before we all headed on over to our favourite drinking establishments, Samsung unveiled the new and improved (or pimped up) Tocco Ultra Edition.

Find out all about it after the jump

Now the Samsung Tocco was one beauty of a handset (and apparently the UK’s best selling handset on a contract during the latter end of 2008) and its predecessor still retains those good looks with a brushed aluminium finish. The biggest and most notable design improvement though, comes in the form of a 3×4 keypad to assist with texting and other keypad related tasks, opening the gates to many phone users with a deep detestation for 100 percent touchscreen phones. The 2.8-inch touchscreen has been given an upgrade too, and now boasts AMOLED status with enhanced haptic feedback and WQVGA resolution.

Underneath its shell you’ll find HSDPA (no mention of WiFi), GPS, an 8 megapixel camera with dual power LED flash, auto focus, face detection and geo-tagging. There’s more. As well as the above, the new Tocco packs Stereo Bluetooth, an FM tuner, DivX/Xvid/H.264 video playback, 30fps VGA video recording and a microSD slot to expand memory up to 16GB (which you’re going to need with a measly 75MB of internal memory).

All the other guff such as pricing, availability and network allegiance has not been confirmed, but word is, it could be making its official appearance in March.