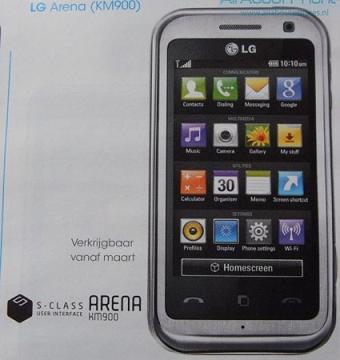 Something tells me Android isn’t the only big thing to take over the mobile phone arena this year. It is more than likely the touchscreen phone, or more appropriately, the iPhone rivals, will be coming in their droves this year, each armed with one objective and one objective only – to kill the iPhone (by kill I obviously mean knock off that pedestal). The LG Arena KM900 is an example of such a phone.

It probably doesn’t need pointing out (as it’s bleedin’ obvious) but check out its incredibly remarkable resemblance to the mac daddy of touchscreen phones (and the Samsung Omnia). But will its specs compliment the design? All we know so far, is it sports a 5 megapixel camera, possibly a secondasry one for video calls, built in GPS, WiFi and what LG describes as an “innovative S-Class 3D interface”. The rest of the specs haven’t been revealed yet, so expect to hear more come Mobile World Congress week (and an explanation of “innovative S-Class 3D interface”?). Specs may be hazy, but it will be heading to Europe as soon as March