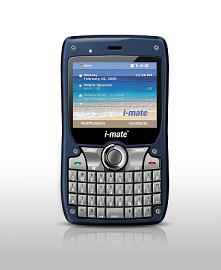 In these tough economic times, we need assurance that the mobile phone we buy isn’t going to malfunction or break and therefore not have a long life guarantee. With the offer of free upgrades on most contracts, having a phone for longer than a year is considered a no no to more than a few. But mobile enthusiasts aside, some people might actually want to hold on to their beloved mobile till it’s literally on its last leg. And in that case, the i-Mate sounds like a good durable choice.

It’s the world’s first phone to come with a lifetime warranty. What gives it this right to claim lifetime durability is its rather rigid and sturdy outer shell that’s been built to tough Military Standards, meaning should you ever find yourself in a war zone, experiencing situations akin to what’s going down in Iraq, your phone will totally survive the blast – not sure the same can be said about you though. I think then, it’s safe to say the phone will survive anything that falls below explosions – extreme pressure, heat, cold, water, humidity and ‘extreme shock’.

Apparently it’ll even survive being run over, hit with a hammer or plunged into cold water. Had it not been for JCB’s supposedly shatter-free phone breaking when dropped on the floor, I’d be 100 percent taken in, but as it stands, I’ve taken this info with a touch of scepticism.

It launches in a couple of weeks for a price unknown.