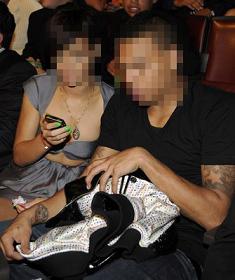 Who’s this lovely lady who appears to be waaay more into her Blackberry than her boyfriend? She’s been in the media *a lot* this week and it’s not been good news. I won’t make it too obvious (all it takes is two words), but all I will say is it involves a bit of domestics with her other half. The speculation is – did he, didn’t he? There has been a hell of *a lot* of rumours doing the rounds in various media outlets, even Leona Lewis has been dragged into it. But the truth still hasn’t been announced. Just what really did happen a few nights ago (I’m dying to know)? 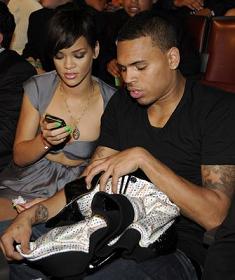 Did you get it? It’s the beauoootiful rhianna-ana-ana- eh-eh-eh. She’s apparently recovering from serious head injuries, bite marks and the like, which are supposedly the result of the wrath of her boyfriend Chris Brown. Something definitely went down, but the question is what? Surely someone so famous wouldn’t be stupid enough to beat the crap out of their equally famous girlfriend, and especially in a public place. But then again it has happened in the past – Eric Bennet, Bobby Brown, and Oprah and Latoya Jackson’s ex-husbands spring to mind!