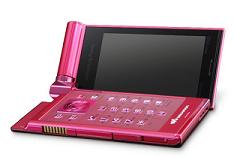 What do you give a Walkman phone with the ability to rip music directly from CDs via the 3.5mm jack? A whopping amount of storage space to help you take advantage of all that ripping? You’d think so, right? Well, Sony Ericsson’s given its Premier 3 Walkman phone a maximum storage capacity of 2GB, which is quite frankly, rubbish for a music phone and has no doubt transformed your enthusiastic grin into an effortless grimace. So it’s for people who like listening to music on the phone, but don’t necessarily want more than at least 300 songs at any one time. I think I get it?

Poor storage aside, the musical clamshell comes with Sony’s EX earphones and a dedicated remote in the same pinky hue, with music controls and a mic. Its 3-inch screen is a beaut, and with a 3 megapixel camera, Bluetooth, Infrared and GPS, there are other features to help you get over its poor storage space.

It’ll initially be available in Japan for 40,000 Yen ($ 450) in white, gold and of course the Barbie-esque pink, later this year. There’s no indication that it’ll be hitting British shores, but sometimes you just never can tell where these things are going to end up.