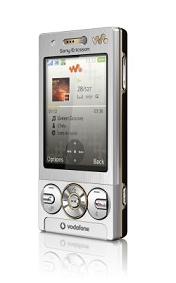 If there’s one company really looking out for discerning mobile phone users or all breeds of mobile phone customers, it’s Sony Ericsson. So, the battle between Nokia and Sony Ericsson rages on with the announcement of the Sony Ericsson W715 slider Walkman phone, which (probably hasn’t gone unnoticed) looks and sounds remarkably like the W705 Walkman phone. But as two separate entities, they do possess different features (and I should think so, otherwise what’d be the point?).

As a Walkman phone, it’s obviously going to pack all the musical features that have become the norm on this kind of handset. This includes SensMe for customised playlists based on whether you have say, a cheery or miserable disposition, FM radio with TrackID and music control with the flick of a wrist using shake control. And if the thought of having a ridiculous amount of music turns you on, the W715 has room for almost 3,900 songs (with a 4GB memory card), which can all be downloaded via Vodafone’s Music services.

Vodafone has dibs on the ‘Luxury Silver’ handset and shipping seems set for the first quarter of the year. Although we can’t give you any price indication at this point, it’s being pitched as an “affordable handset”.