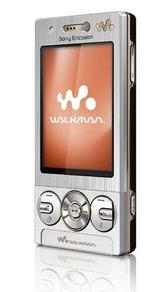 There’s a new music phone on the block, in the form of Sony Ericsson’s W705. It’s got all your standard Sony Ericsson music gubbins, including the Shake controls, SensMe and TrackID. There’s also WiFi, for streaming music or YouTube clips and a screen you can change the orientation of from vertical to horizontal.

The camera ain’t too shabby, at 3.2 megapixels, and in a cute move, text messages can now be seen as a chat thread, iPhone style (although really, it was Palm, it’s just that they never get the credit). There’s also geotagging of your photos, on Google Maps.

It’s going to be available in Luxury Silver and Passionate Red, although to avoid embarrassment we’d recommend you just ask for silver or red in the shop. They’re both exclusive to Orange, and will be bundled with a 4GB memory card when they launch at the beginning of next year.