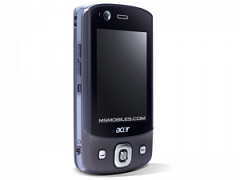 Ok, so last week put an end to those Acer smartphone rumours, as they were quashed with confirmation that the netbook making genius Acer, would be unveiling its very own smartphone at MWC and officially on the 16th February. We weren’t able to tell you very much after that, but due to recent developments, there’s now more to tell (and a picture).

So, we already know it’ll be a Windows Mobile based handset (still uncertain about which version – 6.5 perhaps?), but what we didn’t know was its moniker, which is apparently going to be the DX900. Features will include, dual SIM card slots for simultaneous connections to two networks, for example, for internet/data use and one for making calls. It will also pack a VGA screen, WiFi and GPS, and gives you the option to alternate between 3G/HSDPA or the much slower connecting GSM/EDGE alternative.

Its camera’s megapixels are being tipped at just 3, which will be laughable if Samsung unleashes that 12 megapixel monster later this month.

All other particulars will be revealed next week. So keep it here for all your Mobile World Congress updates.

Check out the latest phones and rumours here