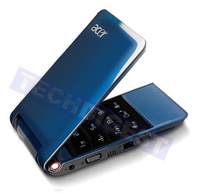 All we know thus far, is it will run Windows Mobile (so it won’t be one of the Android contenders) … and that’s it. All that other guff – price, connectivity, internal brain capacity, availability etc – is likely to be announced alongside the phone two days after that commercial rip-off that is Valentines Day (god, does that make me sound bitter?).

Just so you know, the handset in the picture isn’t it – it’s a mock-up off what could be. But we’ll know soon enough. We just thought you might want to know.

One thought on “Acer's smartphone lands on the 16th February”