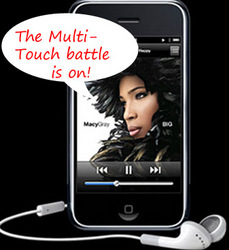 I don’t know if this lawsuit is going to be a Bill Gates vs. the USA government all over again, but the idea that Apple has managed to patent multi-touch technology seems pretty unfair, as there are so many operators using it, or something fairly similar already. Then there’s the fact that this copyright case could potentially force younger developers out of business and stifle healthy competition and it’s the Bill Gates Watergate all over again. Or is it?

Would it be fair to argue that whilst healthy competition is good, there comes a point where mimicry is NOT the highest form of flattery, but a rather embarrassing and POTENTIALLY ILLEGAL OUTRIGHT THEFT OF IDEAS? We need only look at the latest Windows 7 and MAC OSX for comparison, for what can happen when brands keep on developing until they become almost identical. With this in mind, surely it would be fair for Apple to try and protect their market leader status?

What they’re defending is their Multi-Touch software, which allows iPhone and iPod Touch users to easily interact with their users, letting you zoom in and out of various apps which involves using a pinch-like gesture. Which (drum roll please) is VERY like the functionality on Palm’s latest handset, the highly anticipated Pre. It could also be likened to some of the functionality of the G1, and hang on, hasn’t Sony just released news of a MP3 player with haptic feedback? It’s getting murkier as we speak…

Since Apple managed to push the patent through, their lawyers have now turned the full force of their aggression toward Palm, which is slightly worrying as the company is already experiencing trouble in these shady economic times. Hopefully they’ll be able to cope with Apple’s lawyers, as realistically there’s a very small chance of them losing out; but since they’re making job cuts left right and centre can they really afford a protracted legal battle- and doe this means we’ll lose out on the Pre?

Apple COO Tim Cook defended/applauded his actions in a recent statement ‘We like competition. As long as they don’t rip off our intellectual property. And if they do, we’re going to go after anybody that does.’ Well that sounds,um, gentle? And since the hardware is saleable to any Smartphone maker, Apple don’t actually own rights to it per se, so this all becomes a rather big waste of time, equivalent to my Dad’s better than your Dad style.

Still, the fact that a company like Apple feels it needs to get so protective about its applications seems to imply all is not well in the Steve Jobs happy factory,and that the recession may be affecting even the kings of the iPod market. Watch this space- I know I will!