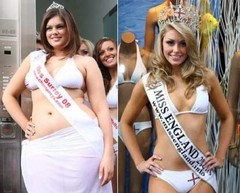 Hurrah, an announcement from the department of the bleeding obvious. If it isn’t an obesity crisis it’s an anorexia scare story and now we have great people shouting that skinny women have more sex than their larger counterparts. Didn’t they say the opposite last month?

Ah, well it’s in the paper so it MUST be true. And apparently they have ‘science’ to back it up. A report taken by weight loss specialist Lighter Life (so no ulterior motive then?) says that 12 percent of people with a high BMI have gone at least a year without doing the dirty and six percent admit to six months without sex. So why is this?

Could it be that the larger you are, the less comfortable you feel shedding those clothes? Sexpert Tracey Cox thinks so, saying, “It stands to reason that the more you like your body, the happier you are to show it off to your partner. Slimmer people also tend to be healthier and fitter which makes them more active and enthusiastic in bed.” No surprise she’s a slinky size 10 is it?

The oh so scientific research discovered that 60 percent of women who are a size eight (like starlets Scarlett Johansson, Jennifer Aniston and Sienna Miller) had sex at least once a week, whilst only 50% of size 12’s get frisky and a mere 33% of size 24’s do it once a week.

Didn’t the Telegraph say in November that larger women have more sex though? ’92 per cent of those who were overweight had slept with a man.’ Oh, and this ‘scientific’ study had over double the number of participants. Nothing like contradicting yourself is there?