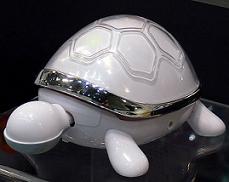 Aww, look at this little fella, it’s so cute with its translucent shiny shell – it just makes you go “awww” with one fleeting look. This little terrapin, that’s been given the over-used and ubiquitous ‘i’ affix in front of its name, will play your tunes, have a little boogie (move over iDog and iPenguin) and display some kind of wonderfully colourful light sequence using its seven LEDs through its shell.

Though, with the Turtle’s stubby legs and little head, there doesn’t appear to be much room for dancing (in the literal sense). It’ll probably be more along the lines of moving a few millimetres left and right, back and forward, while the head bops up and down. But, that’s ok – just look how cute it is. It’ll even whine when it wants more music, which will be interesting to hear as I didn’t think turtles made any noise.

If you’re in dire need of ways to spruce up your desk, what’d be more entertaining than a dancing (ish) turtle? Just plug it into a PC, iPod, MP3 player, or any media player, and watch it go. $19.99 USD here.