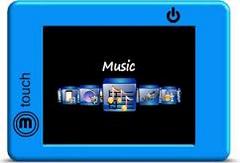 Now here’s a name you don’t hear very often – MCH Media. But it’s not a name to be ignored. I know how easy it is to sweep less well-known brands under the carpet, in favour of media players that feature the words ‘iPod‘, ‘Walkman’ or ‘Zune‘ in them. But the CS-one Media Box Touch deserved as much admiration as the aforementioned players. Why? Well, it’s a touchscreen media player with touch sense buttons for a start and there’s 18 hours of continuous video playback on the cards from a full charge, which means even longer playback when you switch from MP4 to MP3 files.

An accelerometer in place means switching from portrait to landscape will be a doddle – combine that with a fully animated menu and eBook capabilities and it turns out the CS-one Media Box Touch is as good a contender as the rest.