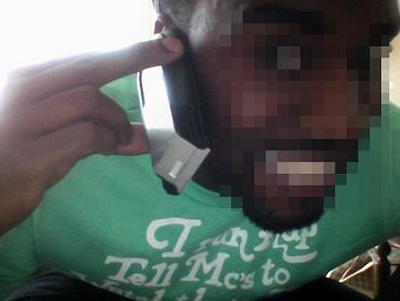 It’s good to see a celebrity getting as excited about his sexy phone as the rest of us. But who is this celeb of whom I speak? Here’s a clue – he’s featured in our ‘guess the celebrity’ feature before, for showing a lack of love and respect for his Macbook air when he threatened to “break my fucking Mac book Air!!!!!!!!” whilst venting his frustration on his blog about a gig related blunder.

He’s notoriously known for his rageful outbursts and hissyfits, namely at the MTV awards, but you’ve got to give him his props. He is a bloody fantastic music producer, rapper and song writer. This however, does not justify his childish and churlish attitude and self-important tirades. He also makes excessive use of that robot voice thingy, or autotune (how it’s officially known) which he uses profusely, throughout the entirety of his latest album.

Got it? Find out who the whiny mic-wielder is after the jump… 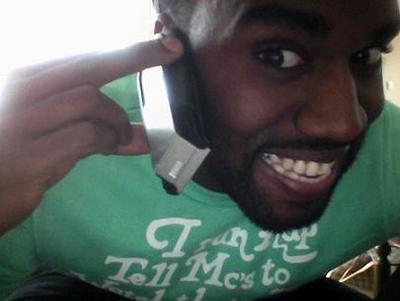 Did you get it? Yessss, it’s serial ranter Kanye West, looking quite the geek in what looks like a MySpace profile style pic, posing with his Bang and Olufsen Serenata Phone. Now, there’s two noteworthy things worth mentioning in this picture. 1. He is clearly ecstatic with his new purchase (or freebie – you know how easy these celebs have it). 2. He evidently wants you to see how enthused he is with his new mobile. Just look at those exhilarant eyes. This is a one *very* satisfied Bang and Olufsen customer.

We have more celebrities and their gadgets:

Guess who doesn’t love their Macbook Air
Who’s showing off their iPhone dipped in 18 karat gold?
Guess who’s browsing their Blackberry bold and scowling at the photographer
Guess which badly dressed celeb is showing off his Blackberry Bold?