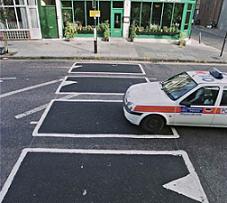 Those annoying beneficial road safety measures, otherwise known as sleeping policeman could be about to get a high-tech overhaul. Power generating road humps are to be tested on the streets of London, in what I do believe is the first in speed bump electricity generating history over here… and perhaps even the world.

I’m a bit upset that it’s not Lewisham but Ealing council doing the pilot hi-tech testing, but if the green move – which uses the pressure of passing cars to generate power – is successful we could see it rolled out across the city, boosting our city’s status further into green and eco-friendly territory.

Each ramp, crammed with electricity producing plates, costs £50,000 – that’s a whole lot of moolah. Absolutely fucking awful Good old Transport For London are funding the project, which is strange because TFL hasn’t even made the cattle carts tubes tolerable and pleasant for us yet and they’re already moving onto the next project. Apparently with a steady flow of traffic, four of the ramps would be enough to power all the street lights, traffic lights and road signs for at least a mile, which means they could be powering a lamppost near you soon.

[via The London Paper]

One thought on “Electricity generating speed bumps the next thing in eco-mania?”