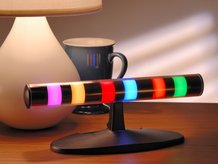 I think there was definitely drugs involved, perhaps some alcohol, fused together because someone thought it’d be a good idea to create a cerazy mind bending cocktail. Whatever narcotics the designer(s) of this timepiece were on, it made them do something crazy. I’m finding it quite difficult to ascertain quite what they were going for. It’s basically a vibrantly coloured tube, a glorified pipe on a stand. But apparently it tells the time. I don’t know about you, but there’s just something about a colour coded clock (each pair of coloured bands relates to hours, minutes and seconds) that doesn’t excite me very much.

So if you enjoy a challenge, a bit of a conundrum and you have at least ten minutes to spare every time you want to know the time, then you my friend, are a better person than me.

Apparently, its creator’s have said it’s a good conversation piece -and yes, they’re right. I’m sure if you owned one, you’d be relentlessly asked ‘why the fuck you have a electronic glow stick ornamenting your coffee table’. Expect a lot of questions – just don’t expect the Chronochrome to tell you the time.

Like this? Read these: The O’clock is one big ass clock| R2D2 now projects the time and wakes you up in the morning