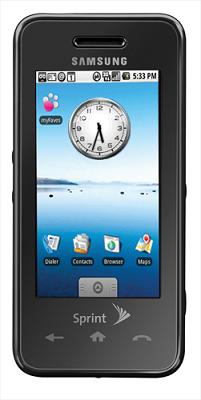 2008 was undoubtedly the year of the netbook, but 2009 is unquestionably going to be the year of the Android phone. The iPhone should be quaking in its boots as of now – something tells me it could be knocked off its perch at some point during the new year. However, if the phone pictured is Samsung’s contribution, it’s safe to say this isn’t going to be the one to carry out the job, but I’m optimistic that smug smile will be wiped off Apple employees faces come the year of the Ox.

The use of Sprint in the title, should have prepared you for what I’m about to reveal – this news applies Stateside. As we should all be aware by now, the law of new gadgetry unofficially states that America gets a look in before anyone else does (either that or Japan), and seeing as the laws of new-fangled gadgetry apply to this Android number, we should probably expect to see it a good few months after.

We already know Samsung is one of the contenders, but that’s about as far as our knowledge went. So, it’s comforting to know we’re getting closer to concrete dates and Samsung’s Android status has moved from ‘2009’ to ‘June’. Design-wise, it’ll be an adaptation of the Omnia (so it definitely won’t be killing any iPhones) and Instinct handsets – so basically a large screened, candybar-esque, minimalist handset. We’re getting there, which also means other mobile makers planning on gracing us with Android handsets next year will be elbow dropping each other to roll theirs out too.