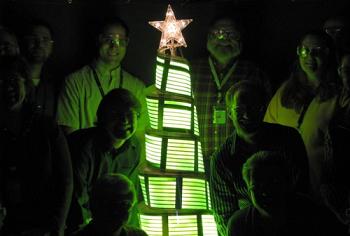 This sinister bunch are either the creators of this rather dashing roll-to-roll OLED tree, or have been put under some kind of hypnotic trance from it luminous glow , transforming them into Stepford Housewives-esque robots (or both). Turns out it’s both. The clever process behind it consists of process created by a newspaper style printing system that prints OLED material onto 8-inch sheets of metal foil. That’s all I can tell you, but it is all very high tech and it’s apparently a process the company behind it (GE) hope to roll out by 2010 to knock the light bulb off its throne and be the new king of home lighting.

OLED lighting definitely isn’t exactly credit crunch friendly, but it’s pretty to look at and it’s all in the name of Christmas – although, I wouldn’t stare it for too long. You might catch what they’ve got and fall under its mesmerising spell.