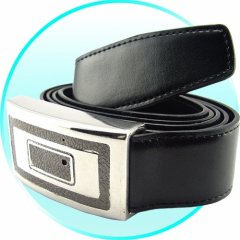 I’m not entirely convinced a camera built into an inconspicuously crafted belt buckle would be entirely useful to someone looking to carry out a bit of stealth-style espionage. But the creators of the Minox Digital Belt and Camera seem to think it will. I can’t help but imagine a thrusting pelvis gyrating upwards to catch an unsuspecting victim in the act – unless you’re spying on animals or midgets.

One thing’s for certain, you’re guaranteed to survive a frisk down undetected with this clever undercover camera/belt buckle. This would be great to wear to a product launch where absolutely no cameras of any sort are allowed to ensure absolute discretion is exercised. I wonder if we’d get away with it? The spy belt sure would have helped at the top secret unveiling of the Sony Ericsson MBS-900. Not like I would have done anything with it of course.

If you’re wondering how it works, video is stored on an easily concealed microSD card and produces 176×144 quality video. And it’ll be available soon.

One thought on “Belt buckle with added espionage”