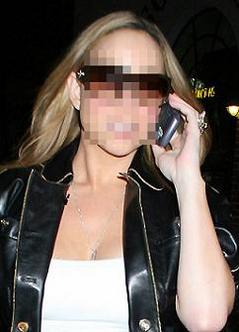 Who’s this hot celeb looking too hot to trot while talking away on her Blackberry Curve? As far as diva demands go, this super diva is up there with the likes of J-Lo, Madonna and Celine Dion. Some of these demands include de-humidifiers (to protect her voice), cuddly kittens, tea service for eight (made only with Poland Spring Water), no stairs (she doesn’t “do” them), Cristal, champagne glasses and bendy straws. Who could she be? Whoever she is, she’s a little bit up herself. I wonder what she does when there’s no lift? Probably get one of her many members of staff to carry her. She’s been around for eons, so perhaps that’s what makes her think these kinds of diva-ish demands are justifiable, although I’m sure her minions don’t feel that way.

She’s come a long way since first stepping on the scene with her huge lungs and amazing vocal abilities – from an all in one Christmas romper (or jump suit), to bikinis, figure hugging jeans and belly tops and generally anything that shows cleavage, high thigh and plenty of skin all over. What are the kiddy-esque outfits about? She’s also recently married a great piece of man candy. 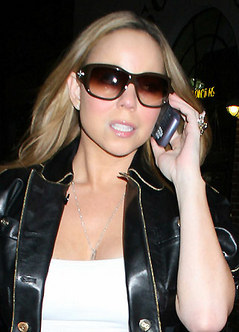 It’s super Diva Mariah Carey, no doubt smiling ear to ear because she’s on the line to her hot new hubby, which (I’m not going to lie) I’m a little resentful about. Namely because Nick Cannon is H.O.T.T hot (and should be mine) but good for her… *gritted teeth* I guess. Things have been a little quiet on the Mariah music front of late, but she’s probably been busy writing loads of cheesy love songs after finally finding love after the train wreck that was her marriage to her first husband, Tommy Mottola at the tender age of 38.

So, she’s a bit of a prima donna. She will only allow people to photograph her from one side, she has ridiculous requests for her dressing room, and in short, she has a major attitude problem. Clearly Mariah Carey thinks being a super celebrity means you can talk to the little people like crap and wear outfits that shouldn’t be worn over the age of 25.