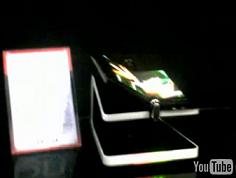 There’s only so long traditional candybar phones, sliders, clamshells, smartphones et al are going to reign supreme. And if this concept design by Samsung is anything to go on, the aforementioned phones are out and folding phones are in. A folding phone? What’s that, how does that work I hear you say? Well as the picture does it no justice at all there’s a video after the jump. But first let me try and explain and see if the concept becomes any clearer.

It opens like a book, it looks like a mini ebook, so is potentially going to take people by surprise when it’s revealed it’s a mobile phone. From the front, it looks like a standard Samsung mobile that’s a bit on the chunky side. Then it opens up to reveal a flexible eye popping sized OLED display that would make Youtube viewing and web browsing an absolute pleasure.

Like this? Take a look at these: Gadgets that would change the world if they were real| Shiny Gallery: The best concepts gadgets we wished were real