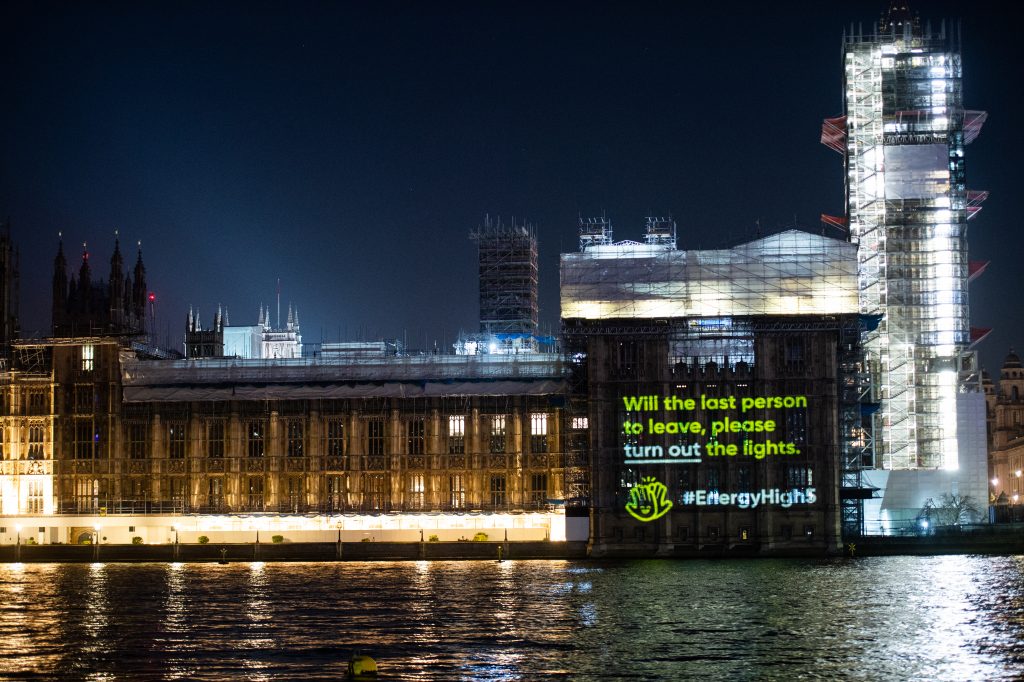 Green energy enthusiasts have projected a message onto the Houses of Parliament asking MPs to ‘turn off the lights.’

The projection, in 20 metre high white letters, was beamed onto Parliament’s façade to increase pressure on the incoming government to take the climate crisis more seriously.

Publicly available data shows the Houses of Parliament increased its energy usage by almost a third (28 per cent) in 2017/18. It comes after a survey of 2,000 UK adults found 75 per cent want the government to lead by example and start saving more energy.

The campaign was led by pay-as-you-go energy provider Utilita, whose founder Bill Bullen said: “The greenest and cheapest energy is the energy we don’t use – there’s just no excuse for using a third more energy each year.

“Our politicians must lead by example by demonstrating how we can be more energy efficient, and the importance of doing so.

“My personal mission is to help at least 20 per cent of the UK’s households reduce the amount of energy they waste by 2025 – that’s 5 million homes, but we hope to reach more than that.

The study also found nine in 10 Brits believe they are now ‘energy aware’ and do their best to reduce how much they use. And the OnePoll figures also found 76 per cent have made an effort to reduce their consumption.

Bill Bullen added: “It is my belief that it’s the responsibility of the UK Government to educate and support the reduction of energy wastage to ensure that their investments in green energy are best spent.

“Renewable energy is expensive to create, making it a false economy if it’s being wasted.

“If the Government has given up on educating the nation, then we are in big trouble.”

Utilita’s #EnergyHigh5 campaign, which officially launches in early January, is designed to educate the nation on how households can waste less energy.

To sign up to the Utilita #EnergyHigh5 Pledge and access simple-to-follow advice on reducing energy wastage, visit www.Utilita.co.uk/energyhigh5

FIVE WAYS TO SAVE ENERGY – AND MONEY (cost savings per year)