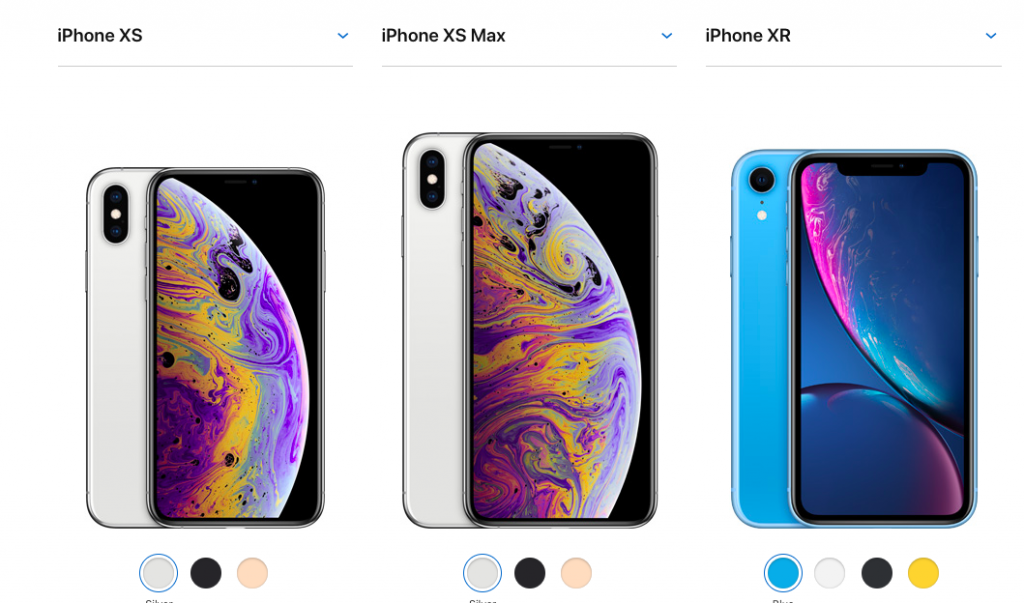 Tomorrow (21st September 2018) sees the official launch of three new iPhone models: the XS (confusingly pronounced 10S rather than ‘excess’), its bigger brother, the XS Max, and the budget (well budget in Apple terms) XR. They all look very nice and it’s interesting that rather than just launching one new model that Apple now seems to prefer launching several models in one go.

Cynics might say that’s because there’s not much as innovation going on these days and by launching just one model they simply wouldn’t capture that much interest. Apple and Apple fans, of which there are many millions, say it’s about giving the customer more choice with different styles and specifications to suit different budgets.

But is it really worth braving the queues and rushing out and buying one of the latest models just so you can show off to your friends? Or should you wait a little while or simply look at one of the latest Android devices instead. After all there’s no question Android phones are improving all the time and prices are usually much cheaper.

5 reasons in favour of buying a new iPhone:

1. Now is a good time to upgrade

Apple knows that people are hanging onto their smartphones for longer and longer, largely because they simply can not afford to upgrade. Despite being launched in September 2014 ,the iPhone 6 remains the most popular model with customers despite its age (research from Newzoo shows that around 21% of all 728 million iPhone devices in use are the iPhone 6). Four years on and many of them are now showing their age. Not only does the iPhone 6 look rather chunky compared to the very latest devices, they’ve also got much smaller screens (4.7inch compared to 5.8inch) and battery life is very poor – you’ll probably be lucky to get more than half a day out of an old iPhone 6!

2. Two of the new models have got nice big OLED screens

Mobile phone screen sizes are improving all the time. The iPhone XS and larger iPhone XS Max are Apple’s second and third phones to boast an OLED (Organic Light Emitting Diode) display (the first Apple device to use OLED was last year’s iPhone X).  OLED technology produces particularly vibrant contrast and colours and is now commonplace on high-end Android devices including the Samsung Galaxy Note 9 and Sony Xperia XZ3 (see here for full list). The only new iPhone which doesn’t have an OLED screen is the ‘budget’ XR which favours LCD technology instead. Not only are screens getting better they are also getting bigger too. The new 5.8inch super retina OLED display on the iPhone XS is as big as the iPhone 8 Plus display while the new iPhone XS Max boasts a 6.5inch super retina screen – Apple’s largest ever display.

3. The new models are very quick

While it’s difficult to get too excited about new chipsets, the A12 Bionic chipset – used in all three new iPhone models – does sound very impressive. Apple claims it’s 50% faster than the A11 chip, capable of processing 5 trillion operations per second. This makes it super quick for loading applications. Apple promises apps will load up to 30 percent faster than they did on the iPhone X and that the entire phone will be 15 percent faster. Gaming and AR (Augmented Reality) apps, in particular, promise to be much responsive on the new iPhones while Face ID which is used to unlock the iPhones is much quicker too. Because the new chipset is so small (just 7 nanometers), it leaves much more room in the case for a bigger and better battery. Which leads us on to…

Poor battery life on iPhones has been a bugbear for most iPhone users over the years. Finally it seems Apple has listened although what you get with the latest iPhones seems to be more about steady, rather than massive, improvement. The “iPhone XS gets you up to 30 minutes longer in your day than the iPhone X,” said Apple’s senior vice president of worldwide marketing, Phil Schiller at the big unveil last week. “With the Max, you get an hour and a half more than iPhone X.” Apple claims the the largest model, the XS Max, can offer up to 25 hours of talk time while with the XS it is around 20 hours. Video playback varies from 14 hours on the XS to 15 hours on the XS Max and 16 hours on the XR. All models offer wireless charging which works with QI charging. They are also fast charge capable (up to 50% charge in 30 minutes).

5. There is a good and affordable-ish new model: the iPhone XR

I started the feature by saying that people were holding onto their phones for much longer because they can’t afford to upgrade. So the development of a slightly more affordable model – ie. £749 for the entry-level iPhone XR with 64GB memory – is significant. In many ways it’s the one to watch. While Apple hasn’t always got the best of track records with entry level phones – people generally preferring the higher-spec models (remember the ‘budget’ iPhone 5C anyone?) – this time things may be a little different. That’s because in terms of spec the iPhone XR isn’t actually that bad. Not only does it feature the same chipset (the A12 Bionic, mentioned above) it also promises better battery life and comes in quite a few colours (see below). The only real differences between the XR and its more expensive siblings is that it doesn’t have dual wide-angle and telephoto front cameras and has a 6.1inch LCD display (as opposed to OLED). It’s also only waterproof to 1m (IP67) rather than 2m (IP68). 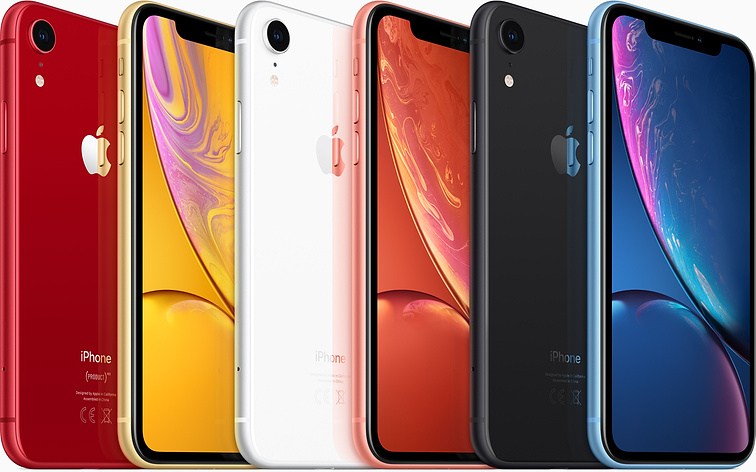 5 reasons against buying a new iPhone

1. Storage is more expensive on Apple devices than Android

There’s still no getting around the fact that iPhones remain more expensive than their Android rivals pound for pound or dollar for dollar. To many commentators it seems you simply pay a premium for the Apple badge rather than the actual features the iPhones offer. For example, storage is quite a bit more expensive on the new iPhones compared to their nearest rival, the Samsung Galaxy Note 9. For $1,000 or £1,000 you get the entry level iPhone XS storage with 64GB of storage while for the same price you get 128GB of storage on the Galaxy Note 9. What’s more, the Galaxy Note 9 also comes with a microSD card slot that takes up to 512GB in external storage, which is a much cheaper route to go.

2. Wait and you will get better deals!

It’s the same with anything – new phones, new cars, even new clothes. If you want to show off to your mates that you’ve got the very latest product from a premium brand on the day that it first comes out then expect to pay a hefty premium! And what’s particularly annoying with Apple products is that the price you pay in dollars is currently exactly the same as in pounds (even though a dollar is, at the time of writing, only worth 75p) – see chart below. This means as a Brit you are paying an even greater premium for Apple products than if you are living in the US! While it’s fair to say that Apple products don’t depreciate as much as other phones, they do still depreciate quite quickly. According to trade-in site MusicMagpie even the 256GB iPhone X is now only worth around two thirds of its original value (approximately £680) a year after it launched. See full story here.

3. There’s not that much to distinguish the iPhones when it comes to features

Although we haven’t seen the new iPhones yet, on paper at least there doesn’t seem to be that much to distinguish the latest models from their cheaper Android rivals when it comes to features. For example, the Samsung Galaxy Note 9 incorporates a dual 12 mega-pixel front camera, the same as the iPhone XS and iPhone XS Max (the cheaper iPhone XR only has one front camera). It also offers the same level of water resistance (IP68) as the iPhone XS and iPhone XS Max ie. to 2 metres in depth. And whereas Apple has removed the headphone jack from its recent products (including the three latest products), this can still be found on most Android devices which means it is possible to charge the phone via a cable and listen to music at the same time. Qi wireless charging has also been common place on high-end Android products for some time and was only introduced for the first time on Apple products last year – see the full list here.

4. Android is getting better and more popular all the time

It used to be the case that Apple’s iOS was much better than Android, but that’s no longer true. Android is improving all the time and certainly in terms of numbers is a lot more popular. In 2017, Android accounted for more than 80 percent of all smartphone sales to end users worldwide and is projected to account for about 85 percent by 2020. And while Apple’s iOS is generally regarded as a more secure platform than Android, Android offers much greater flexibility and, crucially, many better features. Take the area of voice control, for example. Whereas Apple’s Siri used to dominate, the Google Assistant is now widely regarded as superior. It can pre-emptively offer useful suggestions, and it has a more conversational element making it smarter and more versatile than Siri. Similarly Android’s cloud storage is easier to use and more effective than Apple’s iCloud, although you can use Google Drive on an iPhone, whereas iCloud is iOS only.

5. You get more choice with Android

Apple has never offered customers that much choice. Clearly one of the reasons the company it is so successful is that it is squarely focused on the high-end ‘luxury’ sector of the smartphone market. And even though it has introduced a new, more affordable model you would hardly call the £749/$749 iPhone XR a budget smartphone. What’s more there are still only three new models to choose from with last year’s iPhone X already discontinued and replaced by the iPhone XS. That’s not the case with other manufacturers which use the rival Android platform. Not only are like-for-like models generally cheaper, they also offer a much greater range to select from. So if it’s a rugged phone you want such as one of the latest Panasonic Toughbooks or simply a phone for a child that has limited functionality, such as the Nokia 3310, it’s Android you need to turn to.

There’s no doubt there is something very alluring about Apple products. Maybe it’s the large amounts of money they spend on marketing and advertising that convince us that we all want one. Or maybe it’s just they get a lot of things right, such as the design and user interface, which other companies don’t focus on so much. Whatever, we are certainly very eager to get our hands on the three latest products: the XS, the XS Max and the XR. With prices starting at over $1000/£1000, there’s no doubt the XS and its larger sibling, the XS Max, are beyond the reach of many at this point in time. However, the XR is certainly intriguing with its low – relatively speaking – price point. Costing £749/$749, it offers many of the same features as the XS and the XS Max for £250/$250 less. 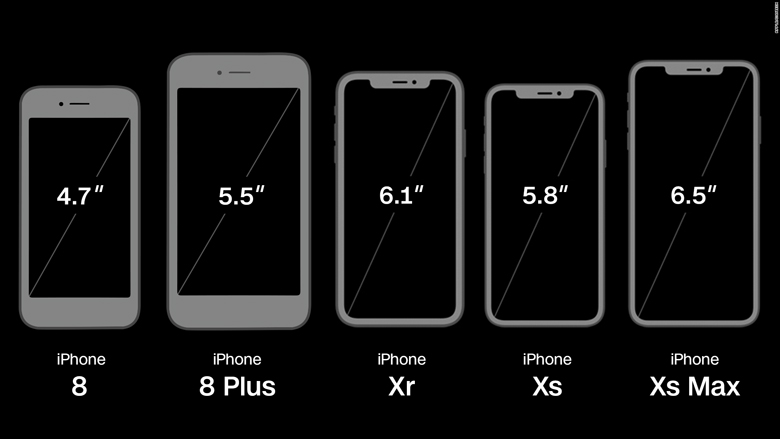