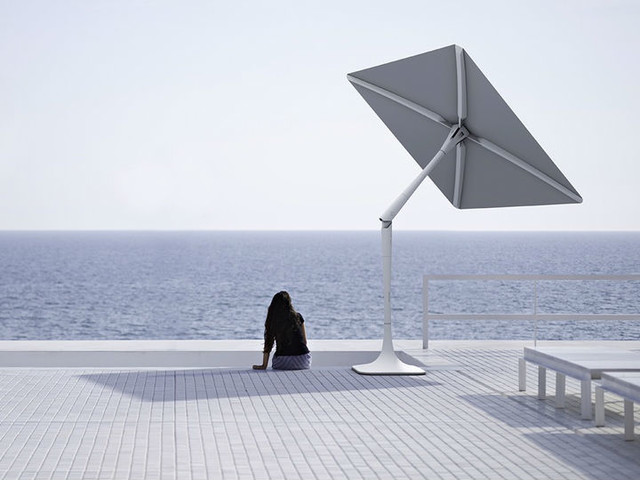 Is there any home or garden object that can’t be given a smart makeover? Seems not, at least if CES is anything to go by. After smart ovens, fridges, even dog bowls, comes this solar powered smart patio umbrella!

Produced by Los Angeles-based smart outdoor living start up ShadeCraft, the Sunflower smart umbrella not only automatically adjusts itself to keep you in the shade, it also includes integrated security cameras, speakers, a microphone, and lights.

These all operate wirelessly and are powered through four slim solar panels that run along the top of the frame of the umbrella itself.
ShadeCraft says the Sunflower’s batteries can hold up to 72 hours of operating charge although whether you’ll got enough sun in London to power the parasol remains to be seen.

The speakers connect to your music devices via Bluetooth, while Wi-Fi allows you to connect to other devices in your smart home — even to use virtual assistants like Alexa and Siri when you’re outside.

Sensors on the umbrella connect to to the internet of course to allow you to monitor UV levels, humidity, air quality, temperature, wind, and even obstructions that might prevent proper deployment.

A companion app will allow for easy access and setup of the Sunflower’s features, along with manual control if the user wishes to move and deploy the shade on their own.

It even has a remote feature to operate the Sunflower. While the app is initially iOS only, an Android app is expected to be released in 2018.

“Smart products are becoming an integral part of our lives. We are addressing their inevitable evolution from the inside to the outside of the home.”

A  prototype of the final design is on display at this week’s Consumer Electronics Show in Las Vegas. A final retail price and launch date have yet to be announced.