After briefly trying the Acer Aspire Switch 10 at Acer’s Edinburgh liveblogging event, we were keen to get a closer look at this super-lightweight laptop-tablet hybrid. We suspected it’d be perfect for working on the go, so we took it to Mobile World Congress in Barcelona to really put it to the test. Here’s our Acer Aspire Switch 10 review.

At just over a kilogram, this is an impressively lightweight transforming laptop. To keep it that light, Acer have used a stylish aluminium casing, with an attractive ‘brush stroke’ finish manufactured using nano-imprint technology (no, I don’t know either, but Acer says it’s very environmentally friendly). The whole thing looks sleek and professional – more than appropriate for business use.

Most of the weight is in the tablet portion of the laptop, which is all well and good until you try to use it anywhere other than a desk. Put it on a bed and it falls over backwards. Put it on your lap, same problem. It’s understandable, since the tablet portion has to function independently and therefore needs more components, and weighting the base would have made the whole thing less portable – but it’s still frustrating when it topples backwards. 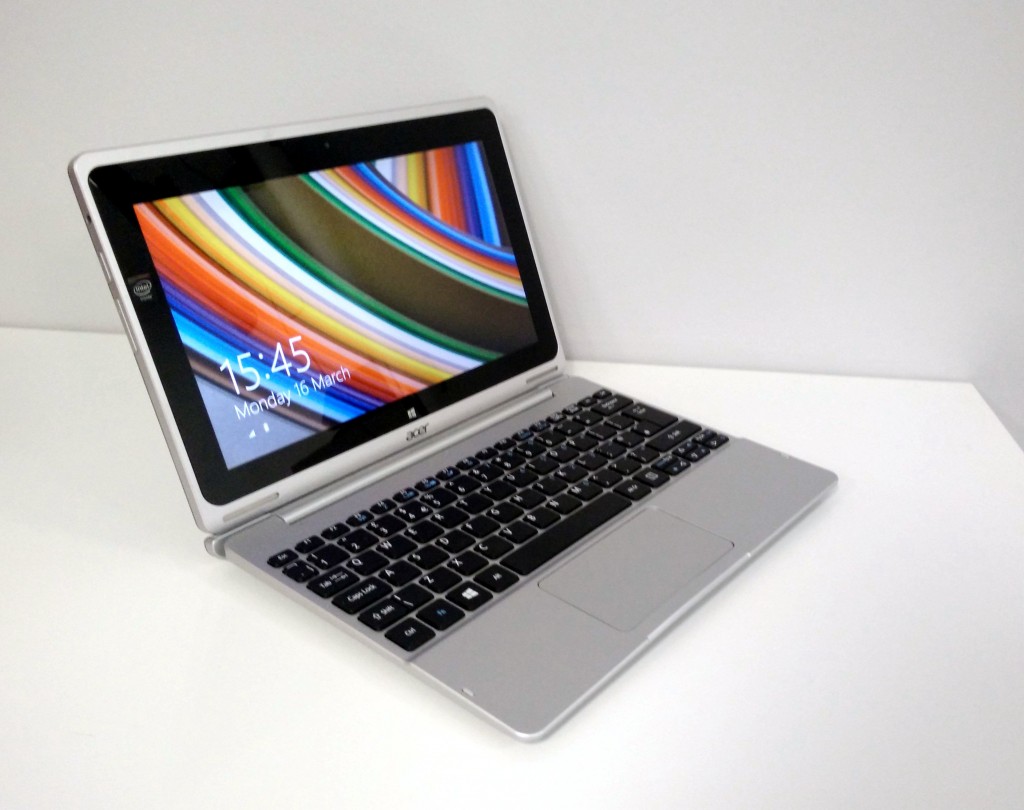 The keyboard is necessarily small and does take a bit of getting used to, but when you’ve been on it for a day or so, you’ll be able to type flawlessly. It’s just a bit more compact than full-size laptop keyboards, with low-profile black keys. The trackpad is smooth and responsive, though the mouse click has to be pressed a little more deeply than I’d like. Only a minor thing, though, and you get used to it quickly. 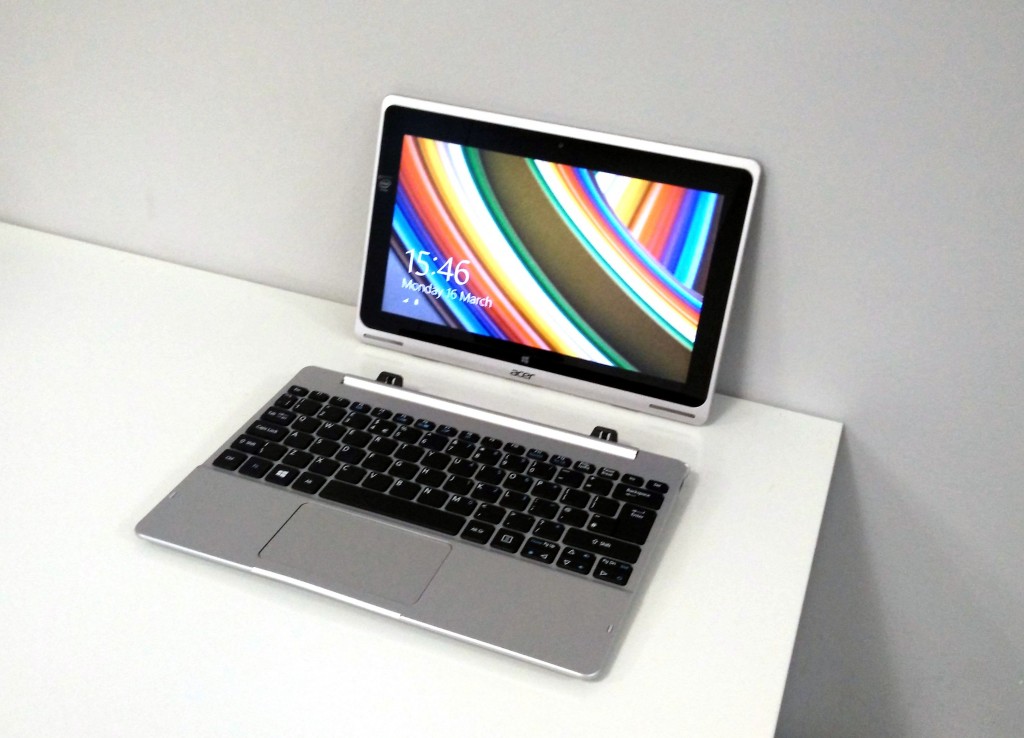 There are two front-facing speakers behind recessed grilles underneath the screen, which means they’re sideways when you’re using the tablet in portrait mode. I’d have thought it’d make more sense to put them at the top and bottom of the tablet, which would mean they were either side of the screen in portrait use – but it doesn’t make a huge amount of difference, except to look a bit unbalanced.

The speakers are surprisingly good. The sound is rich and strong, and goes much louder than I was expecting for a budget device. This might be because of the laptop’s presentation mode, where you might need to play videos – no good having a laptop that’s great for presenting on if you can’t hear the sound from the other side of the table.

Ports on the tablet part of the laptop include 3.5mm headphones, micro USB, micro HDMI and microSD. I was disappointed to find only one full-sized USB port on the whole thing, which is situated on the top right of the keyboard portion. I’d have liked at least one more, since using this at a desk often means plugging in an external keyboard and mouse. Still, there’s always external hubs, or you can use the micro USB port with an adapter.

The tablet portion also has a camera, positioned in the centre of the bezel above the screen. That tells me that Acer considers this a laptop first, tablet second – if not, it would have been placed on the left-hand bezel to be in the right place for tablet mode. It’s tricky to make a device that works flawlessly in both modes for reasons like this.

The camera is OK, dark and grainy but usable. You wouldn’t want to share any images from it, but it’ll be fine for video calling.

The 10.1-inch display on the Acer Aspire Switch 10 is one of its best features. At 1366  x 768 resolution, it’s HD with a pixels-per-inch count of 155 (check the specs on the model you’re looking at, though, because the screens vary). You can easily see the screen from just about any angle since it’s an IPS panel, which again is a huge selling point if you’re going to be using it for presentations. John in Accounting isn’t going to be happy if all the bar charts are dark and unreadable from where he’s sitting. 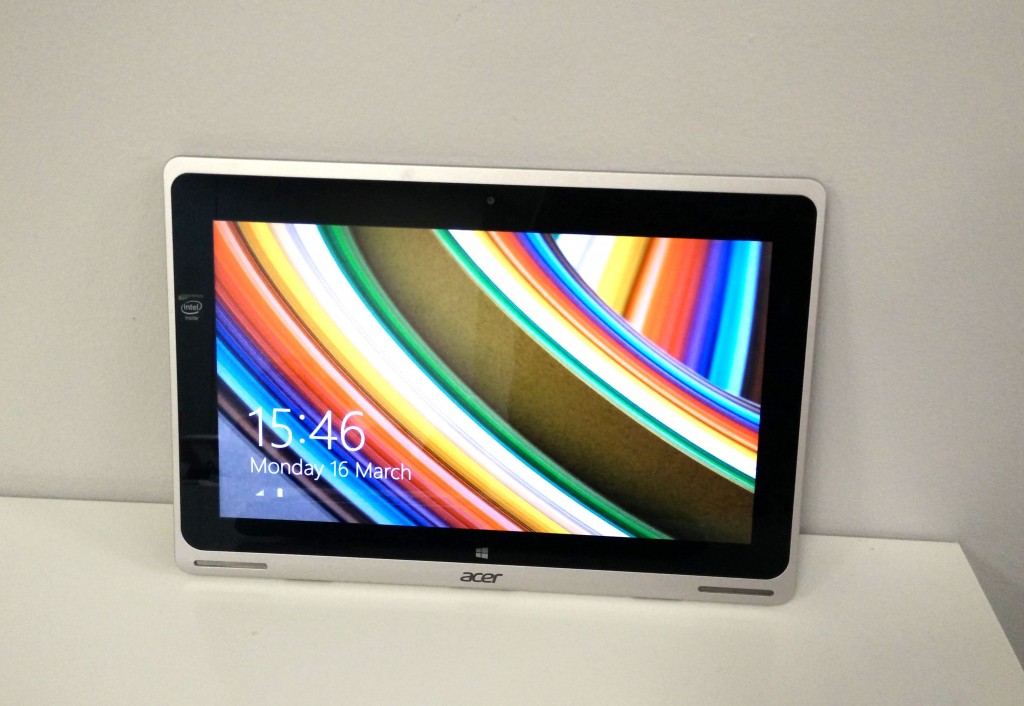 Colours are saturated and vibrant. It’s a gloss finish, which is offputting to some people because of reflections and glare, but I actually prefer it. The bezels are fairly thick (especially if comparing the Switch 10 to an actual tablet) but that’s actually quite helpful when you’re detaching and reattaching the screen, because you need somewhere to hold that isn’t going to activate the touchscreen!

The touch features on this laptop work really well. The screen supports 5-finger multitouch and the trackpad can do the Windows 8 ‘precision touchpad’ gestures: try tapping the touchpad with two fingers for a right click, pinch zoom in and out (only works with some things, like the photo viewer), or sliding with two fingers to pan and scroll.

The hinge on the Acer Aspire Switch 10 is one of its best features. It’s ridiculously easy to pull the screen off the base, and almost as easy to put it back on (although beware of misaligning one of the magnets). Since it’s a magnetic closure, there’s nothing to press or fiddle with, you just pull it off. After using the Switch 10, all other convertible laptop hinges have seemed hopelessly complicated. Buttons? Pah. I just want to yank it!

You can replace the screen backwards for presentation mode: 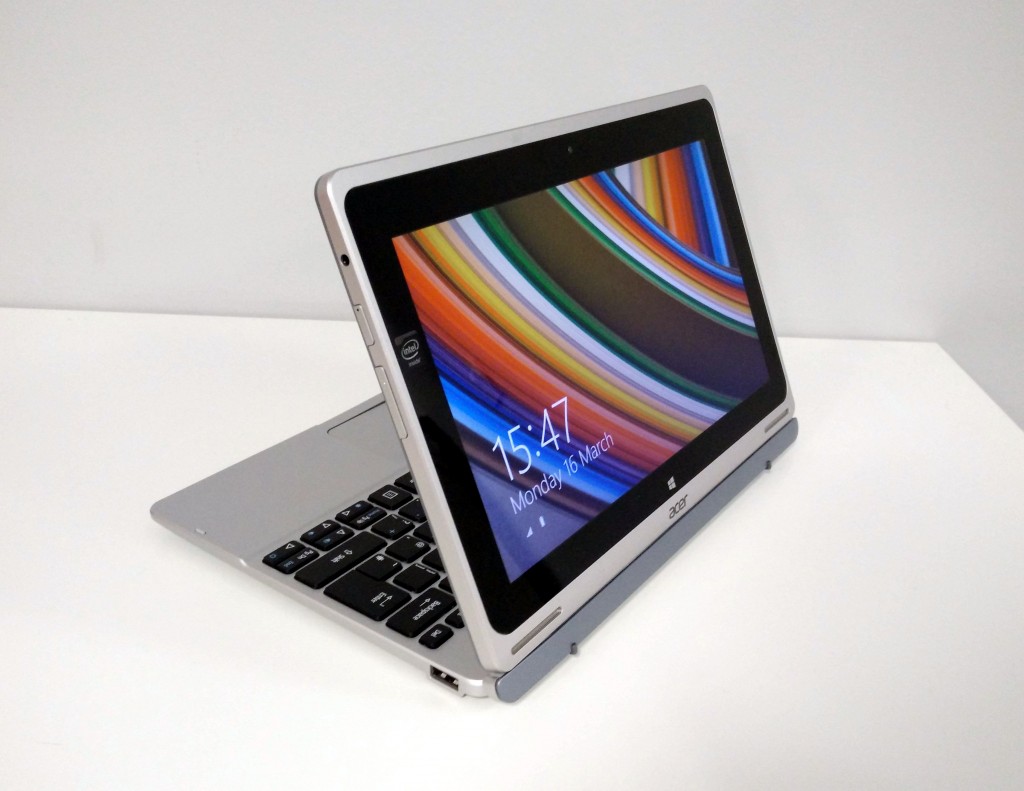 Or use it in ‘tent mode’, which is handy for when you haven’t got much surface space (eg. on those rubbish fold-down tables on trains). 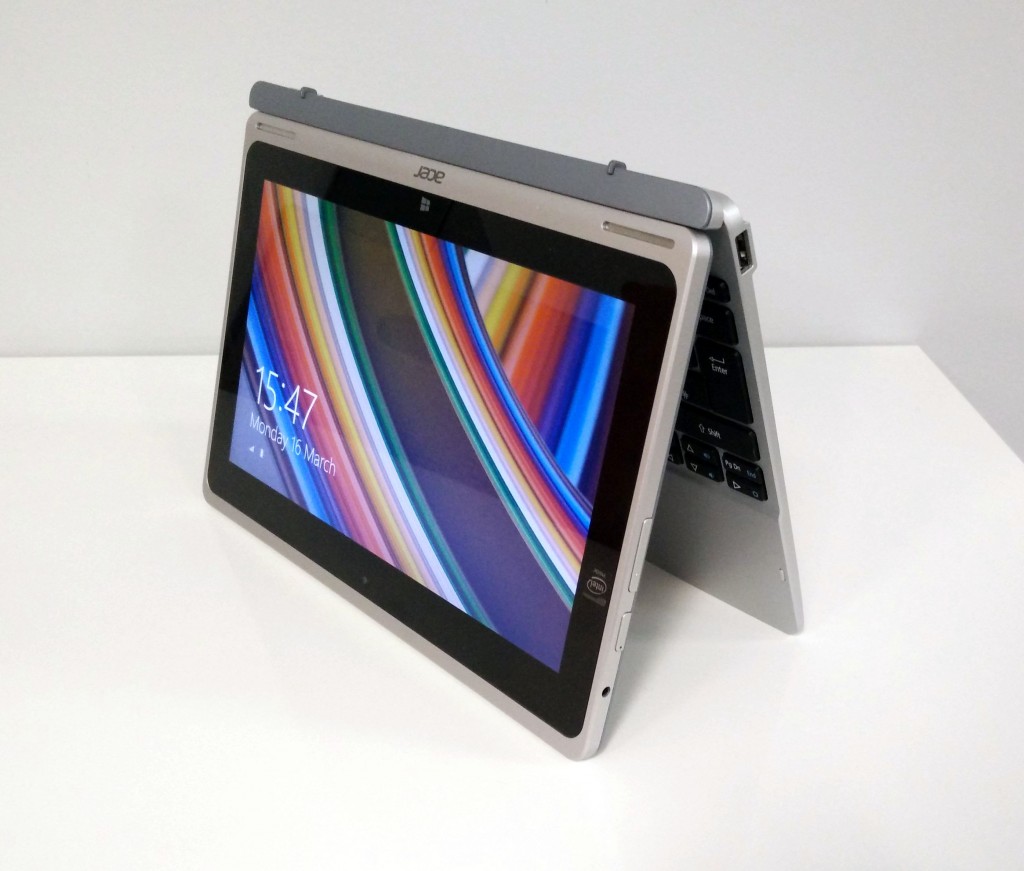 As with the ASUS Transformer Book T200, the Aspire Switch 10 is plenty good enough for day-to-day work activities. It only struggles a bit when you open lots of intensive programs: image editing plus Spotify plus lots of Chrome tabs and Word caused it to slow down considerably, but it’s not really built for that kind of use. I’ve even used it for video editing and had no problems in performance – just try and stick to one or two things at a time. That’s completely fair and expected at this price point.

I’ve had a couple of crashes on the Aspire Switch 10, mainly when opening and editing lots of images. Having said that, I was using Pixlr, which seems to cause issues on quite a few machines. The Transformer Book T200 struggled with it too, so I think we can put that down to the software.

The only other issue I’ve had is the keyboard randomly not working – about five times in the last month it’s just stopped responding, and I’ve had to unplug and re-plug the screen to get it to reconnect. It’s an easy fix, but frustrating when it does occasionally happen.

The hardware behind the Switch 10 is incredibly similar to the ASUS Transformer Book T100 (the model down from the one we reviewed), which is currently a little more expensive at £320 to the Switch 10’s £290. The Switch has an Intel Atom Z3745 Quad-core 1.33 GHz CPU, 2GB of RAM and 64GB of flash memory, so the only difference between it and the £320 model of the T100 is the storage space: the T100 only has 32GB. Everything else is the same, even down to the size and resolution of the screens, which means you’re getting the same machine with an extra 32GB of hard drive space for £30 less. Easy decision! (Until the prices change again…)

The Acer Aspire Switch 10 also comes with a one-year subscription to Microsoft Office Personal , which is a bonus if you haven’t switched to Google Docs yet.  It runs Windows 8.1, which really seems to hit its stride on hybrid machines like this. All the touch features work extremely well and the OS runs flawlessly.

Alongside this, though, is a fair whack of bloatware, which we’ve come to expect from Acer devices:

I checked the hard drive when the laptop arrived, and over 10GB was already taken up. That’s not great, although you can of course remove most of the Acer and third-party programs and apps to free some space, and there’s a microSD slot to add more.

It does seem to be an unusually naggy laptop, too, with lots of programs and services popping up messages about scans and updates and backups, but again that’s probably something you can ameliorate by tweaking and deleting.

Some convertible laptops have a second battery in the keyboard portion, but the Aspire Switch 10 doesn’t, and I think it’s a bit of a shame. It could have solved the tipping over problem and boosted the battery life at the same time, but of course at the price of being a bit heavier.

Acer don’t mention battery life at all in their advertising material for this laptop, which is a red flag. When you pull out the power cable, the screen dims to a ridiculous degree – it’s unusably dark – so you have to jack it back up again, which is inevitably going to decrease the amount of time it stays alive on battery. Using the Switch 10 for just web browsing and writing, it lasted 3 hours and 20 minutes on 3/4 brightness, which isn’t actually that bright.

Three hours on battery alone is plenty for a meeting or presentation, but you’ll want to stay near  a socket if you’re working for longer than that. Especially since you only get one warning before it shuts down; I got one at 6% and then it turned off. When I booted it up again (with power), it displayed a 5% warning, but I never saw that one because the laptop turned off before it appeared.

For the price, the battery life isn’t bad, but it could be better: the ASUS Transformer Book T200TA lasted five hours, by comparison. This is probably the Aspire Switch 10’s weakest point, as you’d expect from a super-portable laptop.

For £290, the Acer Aspire Switch 10 is an excellent buy. It’s cheaper than its main competitor, the ASUS Transformer Book T100, and offers twice the hard drive space. It has a high-res, ridiculously easy to detach screen, and works well as a laptop, a tablet and in its two presentation modes. It’s one of the few examples of the Windows 8.1 experience as it was intended to be, rather than limping along the way it does on non-touchscreen laptops.

The Switch 10 is also very, very light, which means it’s ideal for working on the go. Do bear that falling over issue in mind, though. We’d also like to have seen less bloatware, fewer crashes/bugs and longer battery life, but again, it’s only £290.

Overall, as long as you’re able to charge it every 3 hours or so, the Acer Aspire Switch 10 is an ideal choice of hybrid laptop for someone on the move, and it made our lives much easier at Mobile World Congress.

You can buy the Acer Aspire Switch 10 convertible laptop at Amazon UK now for £290.